Justice O. Ottaba of the High Court in Banjul has adjourned the criminal trial involving the state against one John Fernandez Sarr, for judgment.

The judge made this pronouncement on Thursday 8 December 2016 after the court adopted both the prosecution and defence briefs of arguments.

The accused was alleged to have, on 23 December 2014 at Father Ferrel Memorial Hall at Westfield in the Kanifing Municipality, with malice aforethought caused the death of one Alasan Jammeh by unlawfully hitting him with a stone on his head.

The prosecution led by state counsel Olimatou Danso called six witnesses and tendered several exhibits to prove the charge against the accused, whilst the accused testified on his behalf and called one witness in his defence.

When the matter came up last Thursday, state counsel Danso informed the court that the state had filed its briefs of argument on 7 December 2016 and she, therefore, urged the court to convict the accused as charged.

The brief of arguments of both parties were deemed adopted by the court.

The matter was then adjourned until 12 January 2017, for judgment. 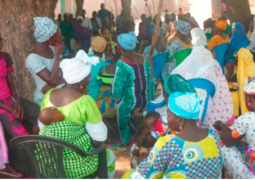