Drammeh, who is also Pointsport's anchorman number two, was among African sports journalists who attended the top-rated journalism course, organised by Agence France Presse (AFP) and FIFA the governing body of world football.

The award didn't come as a surprise to those of us who work on a daily basis with Drammeh, since we know his capabilities and the passion he has to excel in his career. While, he was away in Dakar, his absence was noticed, which goes to show how valued he is by his colleagues.

Indeed, the Gambian sports writer performed remarkably by coming second in a course which saw the Liberian, Roland M. Mulbah, who reports for SportsDay, Champions Sports and www.liberiansoccer.com as a senior reporter winning the top spot, after scoring the highest marks.

The questions for the test were given by Rome-based English journalist, Barnaby Chesterman, who was the instructor for the journalism course.

Another Liberian Fomah Kanneh, who is also the Vice-President for SWAL, secured third place.

The award is an honour for not only Drammeh, but the entire Point family and the country as a whole. It should as well serve as a challenge and a source of motivation for the Pointsports reporter.Drammeh indeed did us proud by showing to all journalists who attended from the sub region, and the course organisers that Gambian journalists are up to the mark and can make a mark in journalism.

As a young reporter, the challenge for Drammeh is to keep working hard and to put in to practice what he learned from the training course.

As is well known, it is one thing to be trained, and to receive an award for excellence, but it is another thing to put new knowledge and skills into action, for the benefit of Pointsports and our readers.

We believe that Drammeh will not be found wanting in this regard, and would, therefore, urge him to continue to take his work seriously, since with The Point can always be rest assured of such opportunities for professional development.

It worth mentioning that in December 2006, when The Point newspaper got the International Press Freedom Award (John Philip Palm), which was received by the Managing Director Mr. Pap Saine in Germany on behalf of the company. 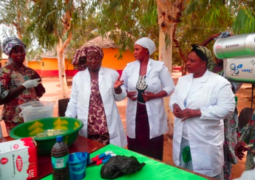