The President of the Gambia Volleyball Association and Secretary-General of Zone II Volleyball Committee, Musa Cassa Taal on Monday left Banjul to join his compatriots in Africa Volleyball Congress currently in session in Algeria.

The three-day volleyball congress would give the Africa Confederation of Volleyball, headed by Dr Amr Elwani the opportunity to elect new executive that is expected to run the affairs of volleyball in for the next four years.

The congress, according to Mr. Taal, would also avail the Gambia Volleyball Association the opportunity to follow up their unsettled arrears, amounting to 3285, 00chf which was earlier waived this year.

And the other arrears of 700chf Swiss from 2008\09 will be settled by the volleyball, says President Mory Keita of Guinea Conakry during the three-day congress that ends on Saturday 26th September 2009. 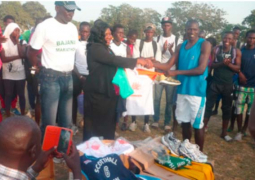