In his testimony, prosecution first witness Pateh Jallow, told the court that in 2007, he was coming from the Tallinding garage going home when he met with the accused Dawda Ceesay who begged him some money to buy bread.

According to him, the accused said he was coming from and that he was hungry. He went on to informed the court that he gave the accused D5, adding that the accused gave him a paper written in Koran and asked him to used it to take bath. 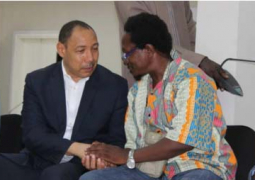