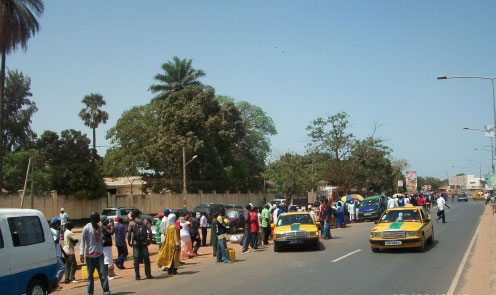 Travellers yesterday experienced a delay in reaching their work places and other destinations, caused by a fuel shortage in the country for almost three days now.

Commuters between Brikama and or and , were yesterday stranded along the major highways.

This reporter investigating the fuel crisis saw many commuters rushing in the early hours of Wednesday morning, with many walking from Churchill’s Town towards Serrekunda and , hoping to reach their destinations and work place on time.

Many complained that they spent hours at West-field trying to get to work, but to no avail as many commercial vehicles were not plying the roads.

This reporter witnessed taxi drivers take advantage of the situation and increased fares from West-field to , charging up to D50.

Private and commercial vehicles could be seen at various fuel stations within the Greater Banjul area searching for fuel.

At the Kairaba Avenue traffic light Galp office, station supervisor Ebrima Jobe told this reporter that they “sell diesel, kerosene and gasoil”, adding that there is no diesel at the petrol station, “but by Saturday things will normalized”.

He dismissed talk of a fuel crisis, calling it a fuel shortage. Mr. Jobe also dismissed fears that it will lead to an increase in the fuel price.

“There is likelihood the shortage will be resolved very soon,” he declared.

Sounding the opinion of some the frustrated commuters, who were left with no option but to trek, most said if the situation is not remedied soon, it will have a serious effect on the work force.

Ebrima Jabbi, standing for more than two hours without transport, felt something should be done to curtail the looming fuel crisis and the skyrocketing prices in the country.

“The taxi drivers are charging us D50 to , which I feel is part of greed, as they take the fuel shortage as an excuse to exploit poor commuters.”

“The charges to are costly. How can these drivers charge us D50 to ? They should help people to go work. Some drivers are collecting double the fare from West-field to ”.

“As you see journalists, we are here with our children taking them to clinic, but since early morning we have been standing without a vehicle,” Rohey Cham, a mother of one, told this reporter, while expressing her disappointment with the way and manner some drivers were using the fuel scarcity to exploit commuters.

One Buba SM Ceesay, a student at the University of the Gambia said, “I feel very bad, as this comes as a surprise to a good number of people, especially commuters like me who travelling from Serre Kunda to Brikama every day. We were thinking that the same normal movement is going to take place, but have seen a sudden change to lack of transportation. We were told that it was due to lack of fuel in town.”

Ceesay said he and his colleagues will miss their morning lectures, due to the lack of transportation, adding that this was a cause for concern.

“Because of this everything came to a stand still; just because of a fuel problem. This show that transportation in this generation is indispensable. We cannot go without transportation; so this is something of concern, and we are calling on the authorities to maintain transport fares rather than thinking of increasing, which will affect us as students,” he said.

Lamin Samateh, a commercial van driver plying Serrekunda to , whose vehicle uses gasoil could not ascertain the actual cause of the fuel shortage.

“There is no gasoil in town. We queued for fuel yesterday at Jah Oil Company, but as of today the station ran out of fuel. I am about to run out of fuel, and if that happens I will be left with no option but park my car,” he said.

“D50 to is expensive for ordinary Gambians.” Prince Henry also shared his reaction.

Mustapha Jallow, another commercial vehicle driver plying the coastal road--Serrekunda route called for understanding between commuters and drivers, as it is a difficult moment for all.

Ida Jarsey, a student from , who is currently sitting to her final exams was also stranded at for hours. She said she was feeling unwell, and trying get to hospital in for medication.

“I am sick, I left the exam hall to visit the hospital in , but it is sad that I cannot have transportation to . It’s really worrying,” she told The Point.

Lamin Marenah said he has been trekking from his residence around ‘’ in Serrekunda to without a vehicle for .

He said taxi drivers were charging D50 to , which is difficult for low income earners like him.

“It’s too expensive. At this moment I’m going to work, charging me D50 is expensive.”

He called on the authorities to come to their aid. Momodou Saidy, another commuter, shared the same view.

Efforts were made by this paper to talk to major stakeholders in the industry, but all those approached were not willing to talk to the press.

Protecting our children from harm!