Comium, one of the leading GSM companies in The Gambia, Tuesday donated food items and other valuables to sixty-one families in West Coast Region.

The donation was made at a presentation ceremony held at the regional disaster office in Brikama in West Coast Region.

Speaking at the handover ceremony, the regional disaster coordinator, Serign Modou Joof, thanked the donors for the “humanitarian” gesture.

He added that Comium some time ago launched a new product called the ‘six one six one’ in Brikama.

He said that product was specially done so that people could send text to a particular number and win something. It was from that initiative they raised the funds for the donation, he explained.

Mr Joof said that during the launching of the product, Comium gave the regional disaster office thirty mattresses, thirty bags of rice, and ten bags of onion.

He also expressed delight and appreciation for what Comium had done for the disaster victims of West Coast Region, adding that his office would always rally behind Comium.

He also encouraged people to be texting six one six one.

Mr Joof said further that his office would be concentrating on rehabilitation. “The rehabilitation stage is the most expensive stage in the sense that it determines how to help the victims to build their compounds and to settle their peacefully,” he said.

“On behalf of the Governor and the entire disaster management board of West Coast Region, we would like to thank the entire management of Comium for their laudable gesture,” he said.

He also used the opportunity to call on other companies to emulate Comium. 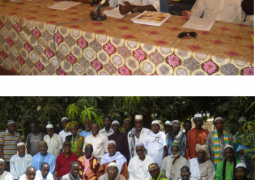 Charge sheet against Ex-IGP Badjie and two others