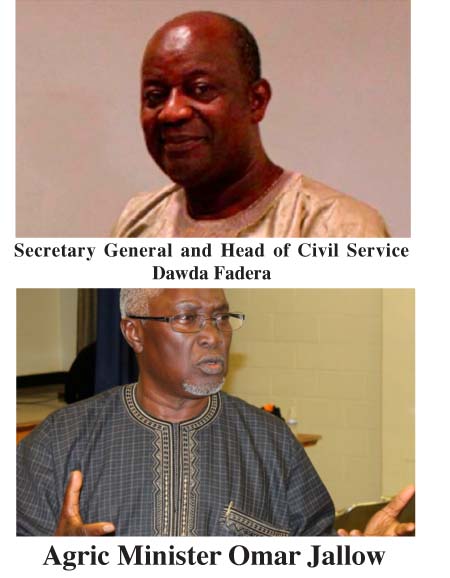 The arbitrary dismissal of civil servants ended with the fall of Yahya Jammeh as the new government has assured civil servants of security of tenure and promised not to lay off anyone just like that.

“I can assure you that henceforth, you will not here any case of dismissal, arrest or detention of civil servants,” said Omar Jallow, minister of agriculture, during his recently concluded nationwide tour of agricultural project sites.

The minister said security of tenure in the civil service is assured in the government of President Adama Barrow.

“There is no cause for fear of dismissal now,” he emphasised, adding that the arbitrary and frequent dismissal of civil servants had led to lose of confidence and underperformance in the civil service.

Hon. Jallow also noted that any government that believes in human rights, democracy and rule of law should know that the civil service should not and most not be politicised.

“Civil servants should be there to serve any government,” he said, adding: “Politicians are supposed to be policymakers but the engine of government is civil servants because they are the ones who implement government policies.”

The agriculture minister said the agricultural sector is ravaged partly because most of the qualified agriculturalists have been sacked by the former regime.

The new government, he continued, is in the process of trying to re-engage the fired qualified agriculturalists.

According to the minister, going forward, there would be no political interference or arbitrary dismissal in the civil services.

Fair play in the civil service

Meanwhile, a press release from the Office of the President has it that President Adama Barrow has had a meeting with members of the Public Service Commission (PSC) at his Fajara office.

At the meeting, President Barrow asserted that the new government has come to promote democracy, fair play and to establish a transparent and accountable system in the civil service.

President Barrow expressed his disappointment about the low salary scale in the public sector, in comparison to the private sector.  He added that despite inheriting a difficult situation, his government’s priority is to stabilize the civil service in its entirety.

He said it has been discovered that while the former government was borrowing from the private banks to pay salaries, a lot of money went to into private pockets and not government.

President Barrow commented that the involvement of the PSC will ensure that there is an independent civil service and concluded that “without the technocrats the politicians will not succeed”.

Ghost workers in the system

He said to conduct the reforms they need to embark on a nationwide staff audit exercise to inform the process on the way forward with the reforms.

Mr Jah said the staff audit exercise has been done, and they are now analyzing the findings to allow the relevant authorities execute the necessary actions.

He added that with regards to the preliminary findings, some of the issues are ghost workers whose salaries are still floating.   It has also been observed, as part of the findings, that some staff do not have the requisite resources to do the job and to respond to the call to improve service delivery.