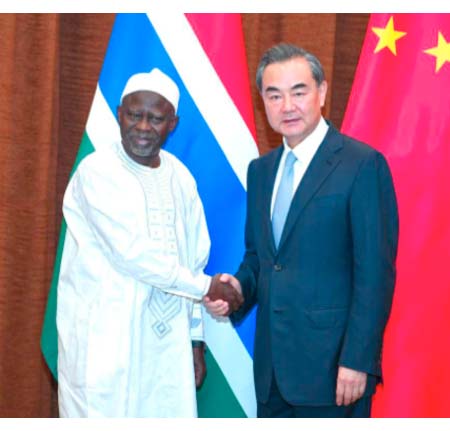 Wang said the resumption of diplomatic ties between the two countries has not only brought bilateral relations back to the right track, but also opened up broad prospects for cooperation.

China appreciates the new Gambian government’s firm adherence to the one-China principle and its commitment to friendship with China, Wang told visiting Gambian Foreign Minister Ousainou Darboe during a meeting.

China is willing to work with the Gambian side to enhance mutual trust, expand people-to-people exchanges as well as strengthen coordination in global and regional affairs to push bilateral relations to a higher level, said Wang.

Gambia will stick to the one-China policy, and is looking forward to pragmatic cooperation with China in various fields, he said.

The two ministers signed an agreement on a consultation mechanism between the two ministries following their talks.

China and Gambia resumed diplomatic ties in March 2016 since the latter recognized that there is only one China and that Taiwan is an inalienable part of China’s territory.

Invited by Wang, Darboe is paying a week-long official visit to China from July 31 to August 6. It is Darboe’s first China tour since the new Gambian government took office earlier this year.