As part of the 20 years anniversary of the Convention of the Rights of the Child, the Vice- President of The Voice of the Young, Mr. Abdoulie Badjie, a student at s has tasked government to put up a special Ministry to be in charge of children affairs in The Gambia.

Speaking at the occasion, Abdoulie Badjie said though government is committed to the welfare of children in all categories, there is need for the establishment of a Ministry responsible for children affairs.

"The government is doing a lot and we are second to none in the sub-region, compared to other countries where children are subjected to all forms of abuse. In other countries, there are children who have no access to school and are prone to prostitution, begging in the street or exposed to wars and used as child soldiers. Looking at the context of The Gambia I can say we are very lucky that we have a government that cares for the children and their welfare," he said.

He added that the government has done a lot and are still doing a lot in respecting and protecting the rights of children in all categories, but he noted that a special Ministry for Children will be more viable.

"You will agree with me that children are the most vulnerable, they are people who are very vulnerable when you come to their age or maturity and physical stands. So there is this urgent need for a specific Ministry to be established to facilitate all other activities that has to do with the issue of children. When you look at the CRC there are to be periodic reports that are supposed to be submitted like the periodic report and the initial report. So obviously having standard Ministry will really smoothen the implementation of government's commitments. If we have a specific Ministry for Children all these commitments would have been smoothly implemented. I think the primary need here is for us to have a Ministry that has to do with generally the work of the children and not having it under a specific department but completely independent," he stated.

Noting that there is only one court which is specifically meant for children, the 17-year-old activist also stressed the need for more children courts to be established in The Gambia.

"We have been seeing rape cases, people trafficking children but we have only one court for children here in The Gambia, that is at KMC and that court is only accessible by children living within the KM, and Brikama. What about the children living in the LRR, CRR, NBR and the URR. If there are cases that involved children from other parts they have to travel that far distance which could be very difficult for them. So we are urging government to establish a children court in all the regions in the country"he stated.

He thanked the government for establishing schools and educational facilities for Gambian children, thus fulfilling Article 28 and 29 of CRC which, he said, is a right for every child.

Madam Fanta Bai Secka, the Director of Social Welfare and Mr. Salifu Jassey of UNICEF, all call for support.

Last Friday the 20th of November 2009, the UN Convention on the Rights of the Child has clicked 20 years after its adoption by he United Nations General Assembly at 'meeting in in November 1989.

According to Mr. Jorbateh, the Child Protection Alliance, since its unanimous adoption in 1989 and entry into force in 1990, the Convention has become the most widely ratified human rights treaty with 193 State parties, testifying to the willingness of states to embrace overarching norms that protect children, regardless of race, sex, religion, ability or other status.

"This instrument reflects the principle of Universal rights and responsibilities that are shared by all nations. The convention obligates States Parties, including the , to fulfil the rights of children as stipulated in article 54 of the CRC" he added.

He also added that the theme for this year's celebration is "Renewing Our Commitment to Children; after 20 years of CRC Existence." This occasion has brought together about 120 young people and adults who will participate in different sessions geared towards measuring progress made in the promotion of children's rights. The occasion also includes , Presentations and Drama Performances.

Community leaders welcome campaign against FGM in the Niaminas 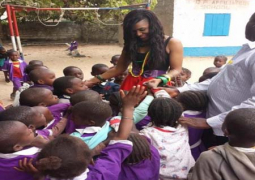