The high standard basketball court which was rehabilitated and developed by Father Gough Sports Foundation, according to the co-ordinator of the foundation, Bye Malleh Wadda is part of their efforts to rejuvenate basketball in the country.

The Minister of Youth and Sports who spoke at the occasion on behalf of the Gambian leader described the event as historic in the sense that it is part of complementing government's efforts in the development of sports.

"The government of the Republic of the Gambia through my Ministry under the dynamic leadership of President Jammeh is indeed playing a pivotal role in the development and promotion of sports in the country. The numerous successes and achievements over the years is a clear indication of the government's support to this noble course," the Youth and Sports Minister said.

The founder of the Foundation Father Gough was delighted to be associated with such a wonderful gesture and went further to used the platform to thank all those who have in one way or the other contributed towards the successful rehabilitation of Manneh Sillah Memorial Basketball Courts, particularly their partners in basketball development, the Gambia Basketball Federation, headed by Mam Essa Gaye, a former basketball star whose contribution together with his team in the development of basketball in the country has been noticeable in the promotion of basketball in the country.

Father Gough was thankful and appreciative of the services rendered by his co-ordinator Bye Malleh Wadda during the whole initiative.

The Youth and Sports Minister later in the day led the contingent on a conducted tour of the facilities which includes dressing rooms, toilets, two modern posts with fabric glasses, a modern scoreboard, among others.

The opening ceremony also witnessed the basketball exhibition match among basketball stars, ranging from both the male and female categories, as well as the presentation of football materials to the Young Africans Football club by Father Gough.

In attendance at the opening of the rehabilitated Manneh Sillah Basketball Court were the Lord Mayor of Banjul, Samba Faal, the President of the Gambia Basketball Federation Mam Essa Gaye, the Deputy Permanent Secretary of Youth and Sports, Abdoulie Kah, among other high-profile dignitaries. 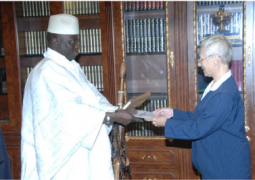 Global Campaign for Education Kicks Off