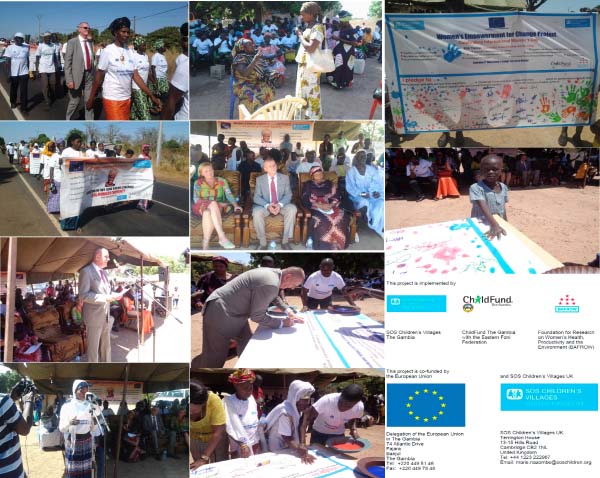 To celebrate International Women’s Day, five communities planned a day of music, dramas, solidarity statements, a march and the signing of a pledge cloth to celebrate the contributions of women to society and to foster further steps towards gender parity.The event, that took place in Kalagi on Saturday 12th March, is part of the ‘Women’s Empowerment for Change’ project, which brings together Gambian development experts SOS Children’s Villages The Gambia, ChildFund The Gambia, the Eastern Foni Federation and the Foundation for Research on Women’s Health, Productivity and the Environment (BAFROW) to work with five communities in the Foni Jarrol District to bring about gender equality.Funded by the European Union and SOS Children’s Villages UK, to the value of 273,859 EUR (200,000 EUR - over 10 million Dalasis - from the EU; and 73,859 EUR – over 3.5 million Dalasis - from SOS UK), the 3-year project is over half way through its work towards building gender sensitive communities, ensuring respect and protection of the rights of women, as Saturday’s event has showcased.

The event was fully owned and organised by the members of the project’s five focus communities - Sintet, Kalagi, Kan Mamadou, Jarrol and Kampassa – with support from project staff.The agenda included a march past, three dramas, and the signing of a large solidarity cloth demonstrating both men and women’s commitment to gender parity.The pledge for parity is as follows:

Kalagi Senior Secondary School Drama Clubperformed a drama, on ‘The Child’s Right to Education’.The other two dramas were performed by Kanyeleng groups from Kalagi and Sintet, the former taking the theme of ‘Enhancing Sustainable Economic Livelihoods’ and the latter ‘Violence Against Women’.Bothreferred to progress already made by the project, as did the opening solidary statement and closing vote of thanks, made by single mothers who have benefitted from project support to set up their own businesses.

Over 200 people attended, including project beneficiaries and their children, community and religious leaders, women’s cooperative groups, members of the communities’ network responsible for addressing violence against women, and implementing and funding partners, including His Excellency Mr. Attila Lajos, Ambassador and Head of the Delegation of the European Union to The Gambia, and Mrs. Erika Lajos.

Everyone - men and women - can pledge to take a concrete step to help achieve gender parity more quickly - whether to help women and girls achieve their ambitions, call for gender-balanced leadership, respect and value differences, develop more inclusive and flexible cultures or root out workplace bias. Each of us can be a leader within our own spheres of influence and commit to take pragmatic action to accelerate gender parity.

Mariama Ginally, a project beneficiary from Kan – Mamadou, demonstrated in her solidarity statement the readiness of the women of Foni Jarrol to say NO to FGM/C and to stand against all violence against women. She further reiterated the commitment of men in accelerating gender parity in their five respective communities. These are her words:

“Today is history in the making, the decision of men to stand in solidarity with women to celebrate International Women’s Day is a clear demonstration of their willingness to provide parity for women. The signing of the solidarity cloth is a further indication of men’s resolve to create an enabling environment for women”.

“For many years women have been marginalized and live to be very vulnerable, now is the time to say NO!! and bridge that gap that continues to exist between us and ourdevelopment. The pronouncement to ban FGM/C by the President of The Republic of The Gambia and the subsequent enactment into law of penalties to deal with offenders is in the right direction and we the women of Foni Jarrol District are saying THANK YOU MR PRESIDENT FOR BANNING FGM/C”

“We continue to be promoters in our own development and committed to engage our communities in empowering the girl child against all forms of violence and abuse, while we promise to change the challenging economic status through our Income Generating Activities”

“While we urge you to be committed to accelerate parity for women, we are not pledging for parity anymore, rather we have taken the bold step to move from pledge to action by ushering the need to engrave ‘parity for women’ in our communities”

“The EU, SOS Children’s Villages, BAFROW and ChildFund have set the pace and facilitated our participation and engagement, we are saying - forward ever and backward never - with harmful traditional practices and violence against women”

“Delegates of the EU, SOS Children’s Villages, BAFROW and ChildFund, please rest assured that the journey will not end here. For now is the time and the women of Foni Jarrol District are marching on to victory, and other Gambian women will surely follow suit”

After H.E. Ambassador Attila Lajos and Mrs Erika Lajos in solidarity joined the beneficiaries in the march, in delivering his statement, H.E. Ambassador Lajos called the attention of the participants in these words:

“Gender equality is a basic human right, a question of social justice, hence a core value of the European Union”.

He further added: “We celebrate women for their role in society, at work, in our families and lives. And we also remember their suffering, hardship and injustice, which for many is still a reality today”.

And that: “We must promote gender equality not just today, on International Women’s Day, but every day”.

In thanking the communities, H.E. Ambassador Lajos said: “Dear brothers and sisters: Happy Women’s Day! and thank you for listening to me. Al Barraka, Alnni Barrah”.

In the vote of thanks she gave, Kaddy Tianna, a project beneficiary from Sintet said:

“Today marks a very symbolic day in the history of Foni Jarrol District because for the first time we are celebrating as a community International Women’s Day and being in the forefront to champion our own rights”.

“For a long time we the women have been marginalized and vulnerable, with little or no access to voice out these challenges; but today through EU, SOS Children’s Villages, BAFROW and ChildFund we can boldly engage, participate and contribute in the advancement of our own people”. “Those days are gone when we say that ‘women should be seen and not be heard’. Today we have a loud voice because we have been empowered with a voice, with skills, tools and with an economic activity”.

“We are very grateful, proud and committed to support all other women, both those in the project and who are not in the project. We are resolving to make Foni Jarrol a model for small scale entrepreneurs through our Income Generating Activities”.

Globally, with individuals pledging to move from talk to purposeful action - and with men and women joining forces - we can collectively help women advance equal to their numbers and realize the limitless potential they offer economies the world over.SOS Children’s Villages The Gambia and its partners are focusing their efforts on empowering Gambian women, through their ‘Women’s Empowerment for Change’ project in Foni Jarrol District.

The project’s thematic areas,that were printedon the solidarity cloth with the Pledge for Parity, include ‘Together we can bring change’, ‘My rights are rights, not privileges’, ‘Promote rite of passage without cutting’, ‘Together we can eradicate the culture of silence’, ‘Sustainable livelihoods for women’, ‘Stop violence against women!’, ‘Functional literacy for sustainable change’, ‘Promoting gender equity’, ‘Safe motherhood’.