As the worst outbreak of the virus ever recorded spreads rapidly through West Africa, the Centers for Disease Control and Prevention explains what’s feeding the flames.

News that two Americans are among those infected with the Ebola virus in a massive outbreak that has killed more than 600 people in West Africa has rattled the country. Prompted by this panic, the Centers of Disease Control hosted a call Monday afternoon to brief health-care workers and the general public on what the World Health Organization deems one of the “world’s most virulent diseases.”

Stephan Monroe, deputy director of the National Center for Emerging and Zoonotic Infectious Diseases at the CDC, began the call by confirming that the Ebola outbreak is the worst in history. Since March of this year, he said, more than 1,200 people in three different West African countries have been infected, resulting in more than 672 deaths. “This is a rapidly changing situation,” said Monroe. “We do expect more cases in the coming weeks and months.” For this reason, the CDC says its response will be more of a “marathon” than a sprint.

Defined by the CDC as “a hemorrhagic fever….native to several African countries,” Ebola first reared its ugly head in Africa in 1976 with simultaneous cases in Sudan and the Congo. A vaccine has not yet been discovered. Symptoms of the disease, which has anywhere from a 50-90 percent mortality rate, can appear anywhere from two to 21 days after exposure and include headache, fever, joint and muscle aches, weakness, diarrhea, vomiting, stomach pain, and lack of appetite. Less commonly, those infected with Ebola display a rash, red eyes, cough, chest pain, difficulty breathing, and bleeding inside and outside of the body. There is no specific treatment beyond what the CDC calls “supportive therapy”—which centers on intravenous fluids and oxygen.

Prior to this outbreak, the most infections in a single year occurred in 1976 when Sudan and Congo presented more than 600 cases combined—more than 400 of which were fatal. In the midst of this international crisis, Monroe says they are “actively educating” American health-care workers about the increased precautions that must be taken to protect the general population. These precautions include doctors taking even more thorough travel history of patients, watching out for symptoms, and immediately isolating those who present as possible carriers.

Despite news that two Americans have been infected in West Africa, Monroe says the outbreak poses “little risk” to the U.S. population at this time. “The likelihood that it will spread here is very low,” said Monroe. Transmission of the disease occurs through direct contact with the bodily fluids of an infected person (i.e. blood or other secretions). But the most important thing to note, says Monroe, is that only those who are symptomatic are contagious.

Despite news that two Americans have been infected in West Africa, Monroe says the outbreak poses “little risk” to the U.S. population at this time.

The CDC says international efforts to combat the disease, which include meticulous tracking of contacts, have been successful—evidenced by the 60 percent mortality rate of this outbreak. To bolster this fight the CDC has deployed a dozen staff members to Africa—five to Guinea, one to Sierra Leone, and six to Liberia. The workers will be rotated out on a 30-day basis.

Also addressed on the call was the man who collapsed on arrival at the Lagos airport on July 20 and later died from complications of the virus. “Health authorities are currently investigating whether passengers on the plane are at risk of infection,” said Monroe. Some speculated that the man was suffering diarrhea on the plane, which raises concerns about whether others who have left the airport are carrying the disease. Nigeria, the most populated country in Africa, has shut down and quarantined the hospital in Lagos where the man died.

Speaking of the two Americans infected in West Africa, Monroe confirmed that they were both involved in direct patient care, and had both received training from Doctors Without Borders. As of today, only one of the Americans is showing a full range of symptoms; the other is presenting a fever only. The CDC says family members who had been with visiting one of the workers returned to America long before the infection. As a precaution, they have been placed on a 21-day fever watch.

A full 42 days (double the potential incubation time of the disease) without any new infected persons are needed before the CDC can declare the outbreak officially over. No one can say for certain how long that will be.

“The concern is the outbreak can be reseeded much like a forest fire with sparks,” says Monroe. “Until we can identify and interrupt every chain of transmission, we won’t be able to interrupt the outbreak,” he says, reinforcing the need to track those who may have come in contact with carriers. “Until we get all the fires put out, there’s still a possibility that it will reignite.” 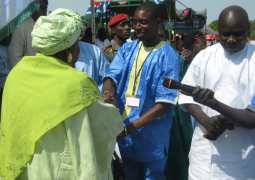