The convergence witnessed several presentations including the strategy document and other plan of action documents, which generated heated debates and discussions for participants to critically scrutinize and ensure there is no room for gaps and lapses.

Speaking at the official opening ceremony, Modou Touray, programme officer, said the two documents would reflect the aspirations of the sector and the actions to be taken to develop the sector.

Organised by sector competitiveness component A, the programme was funded by Enhancement Integrated Framework and implemented by the International Trade Centre (ITC) in collaboration with the Ministry of Trade.

Charles Roberge, an associate adviser on export strategy of the ITC who doubles as the lead facilitator at the forum, said the two documents aimed to improve performance of the cashew and sesame sectors as well as reduce existing issues related to production.

The documents would set the pace for a conducive environment, good marketing and export performance, and strengthening of market orientation.

Mr Roberge said the documents would promote coherent framework to be endorsed by the government as a policy for the next five years.

He also said plans are underway to establish private and public committees to coordinate and manage activities to ensure effective implementation of programmes and activities.

For his part, Njaga Jawo, executive director of National Women Farmers Association (NAWFA), said the sesame sector strategy has been put together from efforts of a comprehensive team of stakeholders with the technical guidance of the ITC.

According to him, sesame was introduced in sizeable scale by Catholic Relief Services, who helped to bring in good variety seeds, established seed multiplication in carefully selected centre; supported the setting up of sesame growers associations and eventually NAWFA.

According to him, the sector competiveness and export diversification project, which provides specific support for the cashew and sesame sector under the component A, focuses on finding new export opportunities, product diversification, improved value-addition, quality enhancement and strengthened sector support institutions. 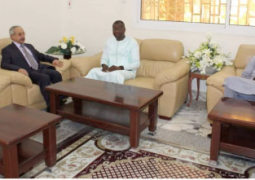