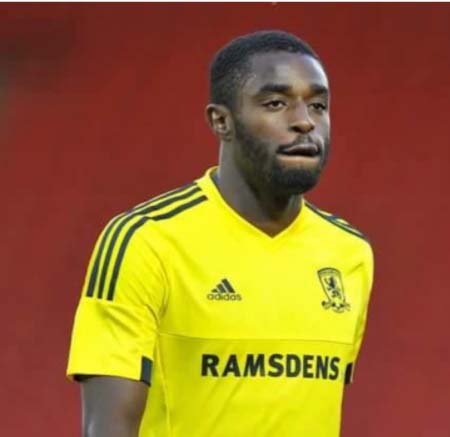 Nothingham Forest popular winger Mustapha Carayol is a massive addition to the current Scorpions team for the upcoming AFCON qualifiers.

The former Swindon Town starlet has been a fundamental part of the Scorpions preparation for the qualifiers.

Carayol has quickly adapted to the Scorpions playing style and delivered moments of individual brilliance.

He has fantastically combined with teammates like Modou Barrow, Lamin Jallow and Babucarr Steve Trawally, in the Scorpions attacking formation.

He was an outstanding member of Scorpions side that recently concluded a weeklong international tour to Morocco and Central Africa Republic, where they held series of friendly matches in the build-up to the Caf and Fifa preliminary qualifier tournaments.

Pundits believed Carayol is fundamental because The Gambia’s hope of making it to the 2019 Nations Cup final for the first time is based on players with his kind of experience and qualities.

And it appears they are getting their predictions right when Carayol responded with a brilliant goal in Scorpions 2-1 win against Central Africa Republic a fortnight ago.

He controlled the ball from a near post after some great piece or artwork with highly-rated attackers, Lamin Jallow and Modou Barrow.

Within seconds on the clock, the former Middleborough star nodded home a fine finish, and secured a deserved 2-1 win for the Scorpions on the bound.

That magnificent doubler was Carayol’s first international strike since he scored a spectacular solo goal in a 1-1 draw with Mauritania, at Stade Olympique Stadium in Nouakchott, last year, only a year after making his Scorpions debut in a 1-1 draw against Uganda in 2015.

Carayol’s goals have further boosted Gambia’s hope of going into the Africa Nations Cup qualifier match against Benin, in great shape and confidence.

He made up his mind to feature for The Gambia in 2015, several years after he turned down the initial request to play for his native country.

Gambia’s closest neighbor Senegal, the birthplace of Carayol’s mother, once persuaded the industrious attacker to play for the Teranga Lions.

But he rejected the offer in favour of The Gambia’s Scorpions with whom he has remained a fan favourite.

He signed his first professional contact with Milton Keynes Don in 2007, after graduating through Swinton Town youth team, and was sent on loan at six different clubs.

While at the London club, the 5 fit 11inch attacker found his playing time difficult to come by and eventually became surplus to requirement under former coach Aitor Karanka, who once hailed the contribution of the impressive winger.

He left Boro for Brington & Hove Albion and then on loan at Huddersfield town and Leeds United, as he continues searching for regular playing time.

He has many Scorpions caps under his belt, and would look to cement his place in coach Sang Ndong’s team for the 2019 Africa Nations Cup qualifiers.

The Gambia is drawn in group D of the qualifiers with Tunisia, Benin and Algeria, as the battle to qualify for the continent’s biggest football tournament draws nearer.