The criminal trial involving Alagie Omar Faye, alkalo of Busura village in the West Coast Region, who was charged with abuse of office, Tuesday resumed at the Brikama Magistrates’ Court before Magistrate Babucarr Secka.

However, the case ,scheduled for the continuation of the cross-examination of the prosecution’s fifth witness (PW5) Alagie Malang Jassey by defence counsel, Buba Jawo, could not proceed as 1st Class 2294 Jammeh, who held brief for CPL Sarr, informed the court that the prosecutor handling the case was sick.

He, therefore, applied for an adjournment, which the defence counsel did not object to.

Defence counsel Buba Jawo also told the court that, on the last adjournment date, he requested a witness statement, and the case was stood down for him to go through the statement, which he did.

He said he was now withdrawing the question which he earlier asked the accused, during cross-examination, and had no further questions for the witness.

The case was subsequently adjourned till 21st February 2011.

It would be recalled that the accused, Alagie Omar Faye, on 19th December 2009 at Busura village in the Kombo Central district of the West Coast Region, being employed in the public service as an alkalo of Busura village, encroached on the and other Jarju Kunda family members, and allocated it to one Ousman Badjie. 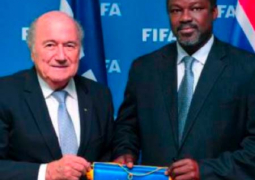