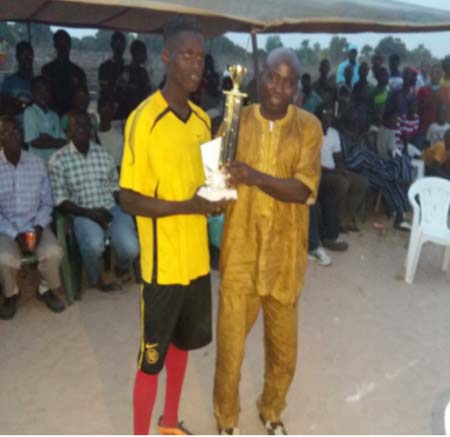 Buckingham FC on Saturday beat Manchester United FC on post-match penalty shootout, after a 1-all draw in the regular time in the final game played at the Gunjur Nyamina Football Field, to clinch the Late Modou Janneh Memorial Gunjur inter-mediate league title for the first time in their history.

The palace boys, who lost to Young Santos FC 1-0 in the rescheduled league after a 3-all draw in the regulation time final last season, came from one-nil down to send the game into spot-kick.

The Gunjur Buckingham-based outfit defeated the Gunjur Daru Salam-based outfit on penalties to claim their first-ever inter-mediate league title in Gunjur after losing to Young Santos FC 1-0 in the rescheduled final after the first final ended 3-all in the regulation time.

As champions, Buckingham FC walked away with a giant trophy and cash prize of D4,000, whilst Manchester United received D3,000, as runners-up.

Lamin Demba alias Giggs received D200, as the best player of the tournament.