The joint manifesto Buba Bojang and Omar Danso launched on Friday 12th September at the Serrekunda East mini stadium has as its title: “Alliance for advancement and standardization of Gambian football”.

The preamble stated their belief and understanding that “this election is a test for building new confidence in a new executive of the Gambia Football Federation (GFF) Bureau with the mandate to continue running the affairs of GFF Gambia, following the unfortunate events that led to the suspension of The Gambia by CAF from all its competitions and the appointment of a Normalization Committee to organize election for the new Executive Bureau.”

They “wish to take from where the ousted executive stopped with renewed effort and great deal of commitment, honesty and sincerity to ensure the lifting of the universal suspension as a fundamental starting point for realization of our desire to make The Gambia a Football Nation.” The manifesto went on:

“The Alliance shall be committed to implementing a totally professional approach to managing the football as laid down in Strategic Plan of The Gambia Football Federation presented at the recently held National Football Conference that shall have a close parallel to the government sports policy and football strategic plan.”

“Despite the geographical vastness, the Alliance shall be overwhelmingly committed to ensuring that the same opportunities are available to all members and regions.

During their tenure, “the plan will provide the essential framework for ensuring the growth and continual enjoyment of the game, they went on, noting that, whilst it is a 4 year plan, it will continue to be monitored quarterly and reviewed annually to ensure it continues to meet not only the needs of our Federation but to address the new phenomenon ‘most go Europe.’

“Recently, the quest for greener pastures has made thousands of young Gambians many of whom are skilled footballers who do not possess the necessary travel documents - visa- to embark on a precarious journey to Europe with the hope of entering Spain or Italy.”

“The Alliance strongly believes that football can address any difficult situation; it is our wish to use football to create awareness, self reliance, inspire hope, reassure the next generation of youthful Gambians that there are better ways one can instead choose. The Alliance believes that the dignity of human life should not be compromised for any struggle.”

“We are a small but great nation, hardworking citizens with numerous ambitions to succeed; it is high time we do not leave anything to chance.”

“It is in this spirit that the Alliance commits candidature for the 20th September 2014 Gambia Football Federation presidency,” the manifesto concluded. 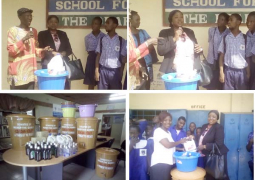