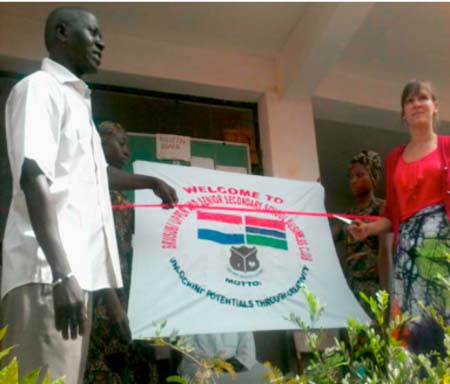 Brusubi Upper and Senior Secondary School has launched a business club in partnership with CSG Wessel Gansfort, Groningen Town School of Business in The Netherlands.

The launch on Friday came after nine Dutch students and two teachers ended a weeklong study-tour on business and entrepreneurship skills development in The Gambia with the students of Brusubi Upper and Senior Secondary.

The study-tour availed the Dutch students the opportunity to interact with their counterparts and it also exposed them to various businesses and business opportunities in The Gambia.

Peter O. Jatta, principal of Brusubi Upper and Senior Secondary School, said the study tour was intended to give the student participants and teachers the opportunity to learn together through the collection of business information in The Gambia.

He said it also gave them the opportunity to attend mini workshops on import and export in The Gambia coordinated by members of NEDI.

He added that the study tour also gave the participants the opportunity to visit identified enterprises in the Greater Banjul Area and Serrekunda Market.

According to him, a good percentage of populations in Africa and Europe are made up of young people.

“Giving them the necessary entrepreneurial skills at this stage of their careers is critical when job opportunities in the marketplace are limited,” he said.

“When we equip young people with the necessary skills at this stage of their educational careers I believe it will help them, because when they finish school and where there are no job opportunities for them, they can use the skills acquired along the way to start their own small business enterprises,” he added.

He challenged the rest of the students to avail themselves of the  opportunity.

“As a school administration we will give it all the necessary support it deserves,” he said.

Eltjo Smit, a Dutch teacher, said it was in December 2016, students and teachers of the Netherland’s worked with this method: Entrepreneurial European Business competence license (EBCL).

He said, “We believe in the Netherland’s that students have better opportunities if they can transform the theoretical method of EBCL into more practical skills and work with others.”

He said they want to work with teachers and students in The Gambia to exchange ideas in the area of business and entrepreneurship.

He said during the visit they worked together with Gambian students on several business activities.

“We visited several places to inspire entrepreneurs. Our students learned a lot of business skills in Serrekunda Market. NEDI also gave them training on entrepreneurship and they are working on a program to establish a business club.”

He added, “We learned a lot and we are very grateful for the great opportunity you gave us. It was great to work together on entrepreneurship; we are very thankful to everybody who have contributed to the success of this week.”

He promised that they would keep in touch and inspire each other on entrepreneurial skills. He said he is confident that the business club will be a big success.

“It is important for students from the two countries to work together and learn from each other on things important to the development of entrepreneurship,” he said in conclusion.

Rita Van den Berg, a Dutch national living in The Gambia, said it was through networking they want to work with Gambian institutions so that the initiative they have will inspire other people.

In The Gambia, she said, it was important to work on the employ ability of the youth, because the youth forms a bigger percentage of the population in the country.

They need perspective to stop using the ‘back way’ to Europe and to build up lives here, she added.

According to her, Dutch students admitted that they are all inspired by their Gambian role models.