Brufut United FC are through to the semifinals of the Western Region third division qualifiers following a 3-2 win over Gunjur FC on post-match penalty shootout, after 0-0 draw in regulation  time at the S.S.P. Football Field in Brikama on Sunday.

It was not an easy road to cross and both sides put up spectacular performances during the match. They launched series of assaults on each other's goal mouth but lady luck could not smile on either side and hence the need for a penalty shootout to determine the winner. The game then went into penalty shootout ending 3-2 in favour of Brufut United FC.

In other qualifiers results, Jah Oil FC of Sifoe village have advanced to the semifinals following their 5-4 victory over Kombo East on post-match penalty kick after 1-1 draw in normal play at the Box bar Mini Stadium in Brikama on the same day at 10am.

Farato United FC also made it to the semifinals following their 6-5 victory over Black & White FC of Berending village, after 1-1 draw in regular time played at the Sifoe Play ground at 10am. 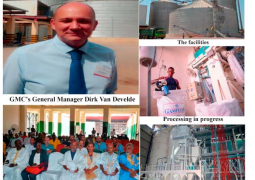