The court case involving three Nigerian nationals accused of murdering one Ian Stokes, a British national, has got to the stage when the prosecution and defence counsel are to address the court, after the defence closed their case yesterday.

Michael Ifunaya Churwbiken, Stanley Agbaze Ugochuku and Collins Chijoke were alleged to have, with malice aforethought, caused the death of one Ian Stokes by stabbing him repeatedly on the neck, abdomen and left arm on 13 May 2012, at Bakoteh Junction Bar.

Testifying at the Special Criminal Court in , the 3rd accused person, Collins Chijoke, told the court that he never conspired with anybody to murder Ian Stokes.

Collins stated that he knew nothing in this case, and preferred to rely on the statement he made to the police.

“I am a barber and have a barbing saloon at Bakau Mamakoto, where I stayed,” he said, stating that on that particular day he called the 2nd accused, , to enquire where he was, but it was Michael who received the call.

Michael told him to buy petrol for him and take it to where he was, and that when he arrived there, he saw Michael sitting in the vehicle in the front passenger seat, he said.

“I handed over the fuel to him and went back, as my customers were calling me. I was in a haste, and I could not discuss with him,” he added.

Under cross-examination, the 3rd accused told the court that he did not know where the 1st accused lived, and on that very day he went to SerreKunda to buy some Nigerian movies, and had called the 2nd accused to find out about their joint business.

When he reached the scene of the crime, he did not see the 2nd accused person, adding that if he had known that there was a murder case there, he would not have gone there.

The place was dark and people were passing in the street, but he did not know how his fingerprint appeared on the door of the vehicle, and it was possible that the fingerprint appear when he was trying to hand over the fuel to the 1st accused.

The case continues today for address. 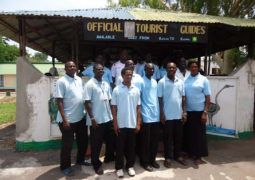