A British national Jean Gilly a philanthropist on Tuesday donated two sets of jerseys to young Juventus FC of Gunjur Kombo North Western Region, as part of her contribution to sports development in Gunjur.

Speaking at the presentation ceremony Ousman Jabang, captain of Young Juventus FC, commended the donor for her timely gesture, adding that the donation will go a long way in promoting the game of football in . He then assured Mrs. Gilly that the donated items will be put into good use.

In her remarks the donor Jean Gilly expressed her readiness in promoting and developing the game of football in Gunjur especially at grassroots level. She then urged the beneficiaries to make good use of the items. 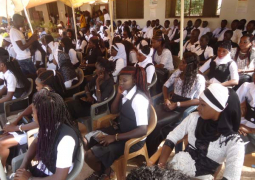