Brikama United on Sunday beat Samger 3-0 in the week-eight fixtures of the 2012-2013 GFA division one league game played at the Brikama Mini Stadium.

Elsewhere, Bakau United drew 0-0 with Seaview at the Serrekunda East Mini Stadium on the same day.

Steve Biko are leading the league table with 17 points in eight games, and Real De Banjul are 2nd with 14 points in six games with two games in hand against Brikama United and Gamtel.

Gamtel and Brikama United are in 3rd and 4th positions on the league standing with 12 points each in six games with two games in hand.

Armed Forces and Bakau United are in 5th and 6th positions on the league table with 9 points each in eight games.

Gambia Ports Authority and Interior are in 7th and 8th positions with 8 points in eight games. 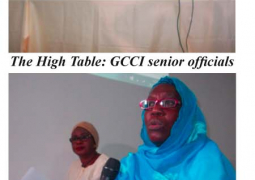