Momodou Jarju, who contested and lost the National Assembly seat of Brikama North as an independent candidate, has been arrested and charged with common assault, The Point has gathered.

Mr Jarju, commonly known as BU Jarju, was arrested for allegedly hitting one Jamai Manjang, a 21-year-old of Brikama Daruhairu, with a stick on her neck causing injuries on her.

Before the incident, on Thursday, between the hours of 19:30hrs and 18:00hrs, a group of jubilant fans of the United Democratic Party (UDP) candidate for Brikama North, Alhagie S. Darboe were on the street celebrating the victory of their candidate in the just recently concluded National Assembly elections.

As the group arrives around the compound of Mr Jarju, who lost the elections to Mr Darboe of the UDP, they were chanting, drumming, singing and dancing.

According to witnesses, among the UDP supporters, some were stating abusive and provocative languages towards Mr Jarju who was addressing his sympathisers to remain calm and accept his defeat in good faith.

The continuous provocation prompted Mr Jarju who was armed with a stick to go the street and attempt to disperse the joyous crowd from his compound area, they said.

Witnesses explained that in the process, he hit one Jamai Manjang a 21year old of Brikama Daruhairu with a stick on her neck causing injuries on her.

Police PRO, Foday Conda, said the matter was reported to Brikama Kabafita Police Post who escorted the victim to the Brikama health centre. 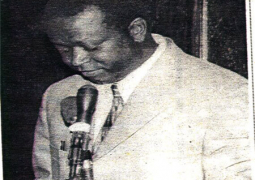