As part of efforts to bring education to the doorsteps of every Gambian, a group of German philanthropist, TSV, recently donated D40, 000, toys and typewriters to in the Kiang Central District of the Lower River Region.

In presenting the money, on behalf of the TSV Marktzeuln in , Mr. Petra Michel said the gesture, which was originally intended as a Christmas gift from the children of TSV Marktzeuln, was diverted to their colleagues in Kwinella, to help complete the school and pay teachers' allowances.

According to Petra Michel, they are happy to give support to the young children in their education career, since they are the future leaders, adding that those children need to have a good educational foundation, if they are to become responsible people.

"We will continue to give them more support and also to expand the school to a better and quality nursery school for the children, who are the future leaders of the country," he said.

For his part, the Headmaster of Kwinella Nursery School, Fabakary Sanneh, commended the donors for the gesture, noting that it would go a long way towards developing the school.

According to Mr. Sanneh, the donated money would be used for the completion of the school, and to buy school furniture such as tables, chairs and doors. He said his school is faced with a serious shortage of tables, chairs and allowances for schoolteachers.

Mr. Sanneh disclosed that among the four donated typewriters, two would go to Kwinella Upper Basic, one for Kwinella Lower Basic and one for the nursery school.

"Am very much grateful for the support given to the school by the children of TSV Marktzeuln, a nursery school in , who have contributed to the development of their colleagues in Kwinella by assisting them in their education," he stated.

He explained that the school needs more support, since they are confronted with lots of constraints, key among them is for teachers to become qualified teachers.

Demba L. Sanyang, the Chief of Kiang Central in Lower River Region, also commended the donors for their magnanimous support in the education of young Gambian children.

Chief Demba Sanyang also called on other donors to emulate TSV Marktzeuln in and support , since the school needs a lot of support in order to deliver quality education to the children. 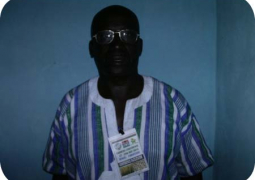