More than D1 million worth of medical items were recently handed over to , meant to improve the health care service delivery.

Speaking at the presentation ceremony held at the premises of the hospital, the governor of CRR, Alh. Ganyie Touray, underscored the significance of the materials, saying they have come at the time they are needed most.

He commended Justice Jobarteh and his wife Amie Jawneh-Jobarteh, who presented the materials on behalf of her husband.

Governor Touray says Justice Jobarteh is a patriotic citizen and someone who loves his country and his people, calling on others to emulate him for his "philanthropism in national development".

The materials are meant to be used in the hospital to diagnose and treat patients, Mrs Jawneh-Jobarteh said, adding that her husband is rendering such help as a citizen to contribute to the development of the country. "My husband is contributing his part to national development," she added.

Many patients visit the hospital everyday, which has made the arrival of "these sophisticated materials" very timely and essential to ease and fasten the work of  doctors and nurses at the hospital, said  Babucarr A. Jammeh,  chief executive officer of Bansang Hospital.

"This will also reduce the referral cases from his hospital to the in ," Mr Jammeh added.

He also highlighted some of the interventions made by Justice Jobarteh, which include the construction of private blocks for male and female wards, contribution to patients feeding programme and other support.

He thanked Justice Jobarteh for his "unflinching" support to the hospital, adding that some of its challenges include electricity, sewage, drainage system and staff quarters for some staff.

Abdou Karim Jallow, acting principal nursing officer, and Mustapha Mbenga, an administrator at the hospital, made statements similar to those of the previous speakers, and promised to ensure the materials are put into good use.

The presentation ceremony was attended by the alkalo of Bansang, Nyamo Touray, Bansang lady councillors and a cross section of the town. 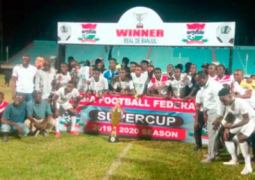