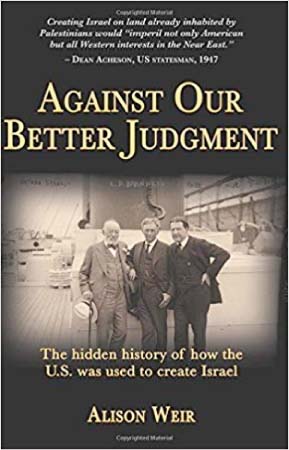 Having studied enough American Indian tribes over the years, I have grown accustomed to creation myths that each tribe assigns itself as its reason for being. And the definition of “chutzpah” that I’ve been taught is that of a young man on trial for murdering his parents, who throws himself on the mercy of the court on grounds that he is an orphan.

That, as Alison Weir has made clear, is Israel’s situation. In Against Our Better Judgment, Weir writes with great clarity how the Zionist movement was able to move politicians, both in America and in England, to legalize a most illegal act-that of stealing an entire nation-and crying foul when those from whom it was stolen complained, then tried to retake the land

. Weir’s in-depth research to expose Zionist actions in earlier times provides a solid basis for her conclusions about creating Israel from a land called Palestine. And she documents the intense lobbying done by Israel’s Zionist creators and their American and British fellow travelers.

We are now living with the consequences of that bit of grand theft, i.e., the continuing violence in the Middle East, affecting everything America might want to do in the region. We only recently witnessed Bibi Netanyahu’s so-far-failed effort to have America invade and conquer Iran, a country that obviously is too much of a mouthful for Israel to bite off itself. Suddenly, even Barack Obama recognizes the danger in following Israel’s advice on how to conduct itself in the Middle East. The president tiptoed to the edge of the abyss but backed away when Israel’s trained seals in the U.S. Congress tried to push the nation over the edge.

We saw congressional supporters of Israel shamefully initiating the dozens of standing ovations when a Joint Session of Congress entertained Prime Minister Netanyahu, who obliged the assembled mass with aggressive applause lines designed to favour those who have a penchant for violence and to show how Israel is “America’s staunchest ally” in the Middle East.

During the 1970s, when I was a member of the U.S. Senate, I was waiting my turn to testify on the Middle East situation before the Senate Foreign Relations Committee. As is the custom, the administration witness was testifying ahead of me. I do not recall his name, but I felt very sorry for him when New York Sen. Jacob Javits asked from the dais, “Please explain why Israel is our most important ally in the Middle East.”

The poor fellow did not have an answer. Granted, he was a lower level State Department official, but his lack of an answer was indicative of the lack of a story provided to him by his seniors in the State Department.

So Senator Javits asked him again, and again, and again, trying to have a statement from some government official which Israel’s Lobby could use in its propaganda campaign to maintain Israel’s lofty position in the American mind. But the State Department official was unable to come up with an answer, which left Senator Javits and his cohorts to try some other avenue. The Israel-is-a-vital-ally shibboleth has since been made into an overused slogan by supporters of Israel.

But each time I hear that phrase, “staunchest ally,” I think of the American sailors on the U.S.S. Liberty, who, during the 1967 Israeli-Arab War, died when the Israeli military was ordered to destroy its “ally’s” intelligence ship. During that act of friendship, America’s staunchest ally killed some 34 American sailors, and wounded another 170.

I also think of Jonathan Pollard, an American employee of our Pentagon, who sold what has been described as “a truckload” of the Pentagon’s secrets to Israel. I say “sold,” because Israel paid Pollard for the secrets, which Israel then traded to the Soviet Union for that country’s relaxation of rules with respect to Jewish emigration from the Soviet Union to Israel

With Weir’s well-researched history in mind, I am forced to think of the cadre of American journalists who lately have assigned “oil” as the reason for George Bush’s folly—the 2003 U.S. invasion of Iraq. They say nothing of the well known fact that George Bush had a number of Israel’s supporters giving him advice on the issue of Iraq. I’ve lost count of the billions of American dollars that were sucked up by that war, as well as the precious American lives that were lost to satisfy Israel’s agents in the Bush administration, those who convinced President Bush to do something that Israel wanted, but knowing it was better if “America did it.” President Obama should be applauded for refusing to fall into the same trap with respect to Syria.

This provocative book documents a history that is essential in understanding today’s world. Scholarly, yet readable, it is a must for all Americans. We all need to know what we have spent by coddling Israel and its aggressions, and why the cost has become more than we bargained for.