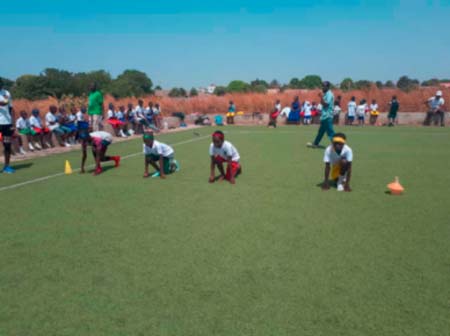 The championship attracted spectators from Yundum and its satellite areas for the school’s yearly biggest sporting festivity.

Idezinras Wokana, Board Chairman of the school said the championship is an annual event, adding that the students did wonders during the event.

He said the school was established in 2003 by the then late Nigerian community leadership Alhagie Benu and others.

‘‘The vision for establishing the school is to make learning easier for the people of Gambia’’, he said.

“We have grades 7 to 9 and we are planning to have grade10 in the next academic session,” he posited.

He said the school has a population of about 160 students, noting that the relationship between the parents and teachers is very cordial.

He thanked the government of The Gambian for creating the enabling environment for them to establish the school.

He went on to thank the Nigerian embassy and his board members for their support.

Alhaji Sacco, Game Master at the school said the performance of the student was very good as all of them gave their best.