The Gambian selection team from Birmingham and Northern part of the UK won the London 2010 Football tournament, organised by YARAM in London on Saturday 7th August 2010. The selection team defeated the Gambian born UK Soldiers (Army Boys) one goal in the final.

Luton complained that the 10minutes given to play each half during the semi-finals was very short.

Nonetheless the Army Boys got one goal each half to face the selection team from the North, who has not lost any game during the tournament. The tournament was divided in two groups: Group A, Army Boys, Crawley, Reading, Birmingham and Northern Selection and Group B, London, Slough, Senegal (London), Luton.

The tournament features good Gambian players who could be making head lines in Europe and The Gambia when they take up football as their career. MC Samba, the son of former Gambian player, Mr. Badou Samba who played for Roots FC and Real De Banjul is among the stars, Ebou Sillah’s younger Pa BOY ALIS beckam

According to Njog Malik, one of the key organisers, the Cultural Week London 2010, is the first of its kind. They organised Cultural Night on Friday, before Saturday’s Football Tournament followed by night dance with the famous Senegalese star, Fallu Diend and Sambou Susso then Sunday wrapped up with Old Hands Vs Medium Age players with an amazing Zimba and Hunting dance, at Mabley Green Park, Homerton.

All those who witnessed the event were happy, and many believe that such good initiatives need to be supported for good.

All the teams did very well to ensure the tournament was successful.

The event was witnessed by Peter Gomez, the Proprietor and Manger of West Coast Radio, Musa Cessay from Birmingham and Lamin Jaiteh, London, as well as many Gambians from different parts of UK. 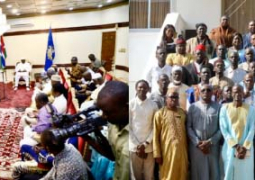