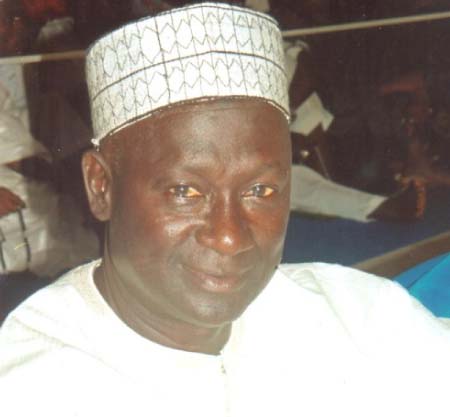 Gambia’s football legend Alhagie Modou Njie widely known as Biri-Biri was on 14 August 2016 elected as chairman of the National Football Veterans Association of The Gambia (NFVAG) at a congress held at the Gambia National Olympic Committee Hall.

According to the acting secretary general of the association, Mafugie Jatta, the congress was overdue as it should have taken place since 1st September 2015.

He said the reason for the delay was partly due to the poor health state of the association’s late president, (the late Abdou MC Jallow, who eventually passed away).

The late Abdou MC Jallow would have served the association from 1st September 2012 to 1st September 2015, as stipulated by the NFVAG Constitution, he explained, saying the association was not fortunate to have a peaceful and successful transition, as it tried on many occasions before the expiry of the late Abdou MC Jallow’s term and shortly after that, but to no avail.

As the situation was getting unbearable, it compelled some concerned members of the association to call for an extra-ordinary general assembly, in accordance with Article 17.1 of the NFVAG current constitution.

The following were appointed temporarily to lead the affairs of the association up to Congress:

The above executive committee was to come up with a programme of activities and a chosen date for a congress.

As part of activities to give more visibility to the association and make it sustainable, the Interim Committee came up with a programme of activities for 2016.

Some of them are establishing a link with the schools through the Gambia Football Association (GFF); planning for a zonal competition that will accommodate retired footballers from 40 years and above; planning for fund-raising activities to enable the association fund its activities with ease; taking part in the Maracana Nations Cup to be held in Burkina Faso next month; and taking part in a regional tournament, under the union of retired footballers of ECOWAS, to be held in Guinea Conakry.

The congress finally took place in a very friendly atmosphere. Senior official of the National Sports Council (NSC) of The Gambia, Mr Secka, was representing the council and stood in as the moderator.

In the absence of a high official from the Ministry of Youth & Sports, Mr Secka volunteered to give the keynote address in which he began by thanking the General Assembly and sports journalists present at the gathering.

He said he was very pleased to be associated with the former players. He went further to say the presence of the veterans in football is very important.

He made a comparison between yesterday and today’s football In the past there was real football and that players were playing for pride, he asserted, saying that Gambian football was ahead of many countries in what used to be known as “Zone II”.

He said The Gambia used to easily beat Mali, Guinea Bissau, Cape Verde, Mauritania and Sierra Leone when there were very few resources.

Today, he further emphasised that our players have everything and yet “we cannot have results”. He therefore asked: why are results not forthcoming?

He challenged the veterans to have a rethink about this situation, as he believed the veterans must come forward whether invited or not and help in developing the country’s football, especially from the grassroots level.

He appealed to end side talks, calling on all to join the system.

Mr Secka informed the General Assembly that Government has been patronizing football in the past and it is still doing so currently, with football getting the Lion’s share in the country’s sports budget.

He praised the GFF for the genuine collaboration in running Gambian football.

Last  but not the least, he added, “as we were going to put in place a new Executive Committee, I  would like to appeal to members of the NFVAG to be honest to themselves and take the positions they are going to be voted in seriously”.

He advised that people should be honest to accept or not, positions given them.

He called on the NFVAG to take reference from the journalists association and try to come up with many fund-raising activities to support “ourselves”.

Mr Secka seized the opportunity and declared the congress open.

Chairman of the Interim Committee, Alh. Modou Njie-Biri, thanked as well the gathering for the trust bestowed upon him to appoint him as chairman few months ago.

He thanked invitees, the journalists and all those who were able to make it to the congress. He prayed for everybody and wished them well.

The secretary general gave a rundown of the activities from the appointment of Mr Abdou MC Jallow to the end of the Interim period (referred to in the introduction).

In the absence of the treasurer, the internal auditor, Mr Habib Mboob, gave the situation of the 2 current accounts holding by the association - the Trust Bank and the Ecobank accounts. The usual report of treasurers we are familiar with did not actually take place, but the new executive committee was tasked to make sure that a proper handing over of the NFVAG former accounts be done to the new treasurer and an extra-ordinary general assembly be called to inform members accordingly.

In the election of the new Bureau that followed, the following officials were duly elected to serve the Association for the next three years (14.08.16/14.08.19):

The following dignitaries will be serving the NFVAG as advisors: Charles Thomas on administration, Kebba Touray on finance and Babucarr Joof on technical matters.

All the positions were voted in by consensus, as one of the alternatives provided by the constitution of the NFVAG.

The vote of thanks was done by the former secretary general of the association, Mr Essa Faye.