The results of the just-concluded presidential polls are an eye-opener for both the victor and the losers.

For the winner, the electoral triumph reinforces his steadily growing popularity. It also justifies his political tactics and strategies.

By contrast, for the losers, it is evident that a lot more still needed to be done.

Seen in this light, the Jammeh government should capitalise on this incredible mandate to ensure an improved socio-economic status for everyone.

It is unlikely for the opposition to learn from their defeat by merely crying foul.

What they should do is to sit back and reflect on what went wrong with their campaign. They should hire some of the best political strategists to help discern their pitfalls and take remedial steps.

There are certain realities we just have to learn to live with. One of such is that incumbency bestows certain privileges. It happens even in the world’s most advanced democracies.

Regardless of what the observers may come up with, it is clear in the build-up to November 24th that the opposition were their own worst enemies.

When they teamed up to hold discussions on the possibility of coming up with a single candidate, the APRC, whether or not they admit it, were frightened out of their wits.

But due to a mixture of power-lust, ego, among others, opposition political leaders fell apart and their discussions foundered without any agreement. Some of them went on their own, and formed a group while others also went on their own to form their own group.

If this was anything to go by, the result of the November 24th presidential election reflects the disappointment of the Gambian people with those they had thought could have offered a viable alternative to the governing APRC.

This should be the point of departure for 2016.

Politics is a game of give and take. Inflexibility has no place in politics. It is still possible for an opposition to form an alliance between now and the next presidential polls.

Instead of hollering about electoral anomalies, the opposition should start preparing vigorously now for 2016.

There is no harm in the opposition picking up a few ideas from the government in power. What about penetrating the grassroots with fan clubs and kafos of various types? What stops key opposition leaders from sponsoring football clubs, youth clubs and women’s groups?

The actual election campaign is not done within the period allowed by the Independent Electoral Commission (IEC). In a society such as ours, informal occasions also provide opportunities for the political interaction and consolidation.

Politics is all about gaining power to improve the welfare of a people. The opposition can still in their own way do this, even when they are not yet in power.

Besides, the results illustrated the saying that seeing is believing.

The Gambian people have seen President Yahya Jammeh implementing one project after another for the past 17 years. Even though this was meant for the mostly naive electorate, it paid dividends for the APRC.

So when the president went around the country, and told the people that he could do much more if he were elected yet again, the people believed him.

If the opposition wants the Gambian people to take them seriously in 2016, they must now start to be seen doing tangible things that will shore up their image and credibility.

The election is over, but the opposition should take responsibility for their defeat, and start doing things that will make them grow strong enough for 2016.

“Politics is the art of the possible” 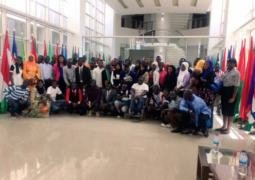