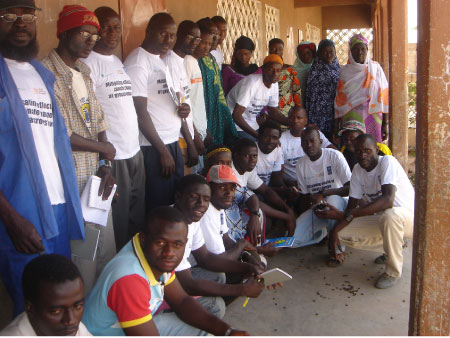 Beakanyang Kafo, a grassroots development organisation in the Upper River Region on Saturday held a daylong sensitisation workshop on climate change with community representatives from across Wuli West.

The workshop whichbrought together forty participants, was funded by the Global Environment Facility, GEF-Small Grants Program under the auspices of UNDP.

Delivering the opening ceremony held in the village of Barrow Kunda, Mr. Menkeh Ebrima Barrow, Councillor of Sare Ngai Ward,  expressed delight to be associated with the sensitisation workshop and to be given the opportunity to formally open it.

He thanked GEF through UNDP for supporting community-based organizations like Beakanyang to enable them embark on climate change adaptation and mitigation initiatives at community level.

He commended Beakanyang Kafoo for its commitment to national development while hailing the organization for its achievements.

“I am aware of your various interventions in the country and salute you for your wisdom and urged you to remain focused to your cause,” he said.

On the issue of climate change, Mr Barrow said, since reducing the adverse effects of climate change on human and natural systems is key, communities need to take more adaptation strategies.

According to him, in The Gambia like many other African countries, climate change is already having profound and irreversible impacts on our economic, social and environmental systems.

He said the climate change scenarios for the country indicate that the climatic variability currently being experienced is likely to increase and intensify.

According to environment experts, issues such as droughts, floods and storms are likely to increase thus the need to take sustainable climate change mitigation and adaptation strategies, Barrow added.

He urged the participants to take the training serious and to share the knowledge acquired with their respective communities.

“For Beakanyang, I wish to assure you of my continued support and collaboration for the overall development of the ward,” he concluded.

Delivering the welcoming remarks, Mr Tumani Danjo, President of Beakanyang, said the training forms part of the series of activities being carried out by Beakanyang as part of a 12-month climate change project they are implementing.

According to him, the forum seeks to create the much needed awareness on the effects of climate change among rural communities.

He added: “It is important to note that in mitigating the effects of climate change we need to actively involve the local communities so that they can also be more proactive in the crusade against the threats posed by climate change.”

For his part, Mr Nfamara Jawneh, program officer and climate change project coordinator of Beakanyang who chaired the occasion, thanked the project intervention communities for their collaboration and support since the commencement of the project.

“I am very much impressed with what is going on the ground and encourage you to keep up the momentum,” he said.

“We hope that you will continue to work closely with us for the successful implementation of the project,” Jawneh said.

For his part, Beakanyang Board chairman, Mr Yahya Sumareh, thanked trainers from the NEA and Regional Agricultural office for enlightening local communities about the threats pose by climate change.