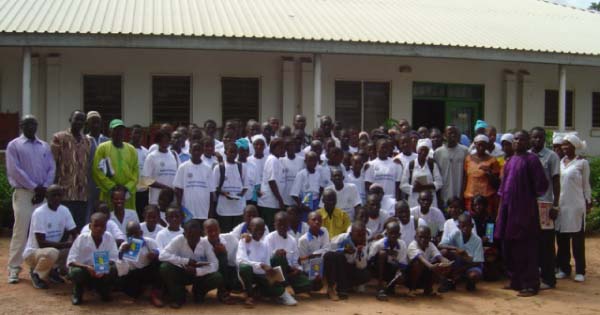 The Wuli-based Beakanyang Kafoo, in collaboration with the Regional Education Directorate, Region 6, on 1 October 2011 held a daylong regional seminar on human rights and democracy.

The forum, held at the conference hall of the regional office, brought together over 120 participants representing seven schools and different youth organizations in Upper River Region.

The theme of the seminar was: “Promoting human rights and democracy at the grassroots level”.

In officially declaring the regional seminar open, the Governor of URR, Alhagie Omar Khan, commended Beakanyang for organizing the event.

He said the government was very much committed to human rights and democracy, which was why it had put in place all the necessary institutions.

He cited the National Council for Civic Education (NCCE) an institution tasked with the responsibility of sensitizing citizens on their civic rights.

The regional governor also used the opportunity to remind young people of their responsibilities, saying every right goes with a corresponding responsibility.

Speaking on the occasion, Tumani Danjo, president of Beakanyang, said the seminar was held to teach young people their rights and responsibilities and to inspire them to become advocates for tolerance and peace.

“We want to see our young people as agents of change and this could only happen by providing them with the rights information and knowledge,” he said.

According to him, the right to development is the most basic human right of every child, and education is the most effective tool for human development.

“We are of the belief that the right of the child must be honoured and respected,” he noted. “The organization firmly believes that the future of human rights, peace and development depends on the young people of today thus the need for these kinds of activities.”

Mr Danjo said that without the active participation of the youth, “no programme relating to human rights is meaningful”.

He also thanked the embassy in for funding the event, which is a clear commitment of the government in promoting human rights and democracy in the world.

Mr Danjo’s words: “Before I conclude, since Democracy is a universal value based on the freely expressed will of people to determine their own political, economic, social and cultural systems and their full participation in all aspects of their lives. We must therefore nurture it and also believe in human rights.”

Omar Sompo Ceesay, chairman of Basse Area Council, said in his remarks on the occasion that democracy and human rights are essential principles of development. “People must be free to choose their own representatives,” he said.

According to Mr Jallow, the Ministry of Basic and Secondary Education has a curriculum on live skills, which also includes issues such as human rights.

Meanwhile, during the seminar, participants were introduced to topics such as the introduction to basic human rights, child rights, promoting grassroots democracy, and the United Nations Universal Declaration of Human Rights.

The ceremony was chaired by Nfamara Jawneh, secretary general of Beakanyang, who urges young people to believe in human rights “since they are not something new”.