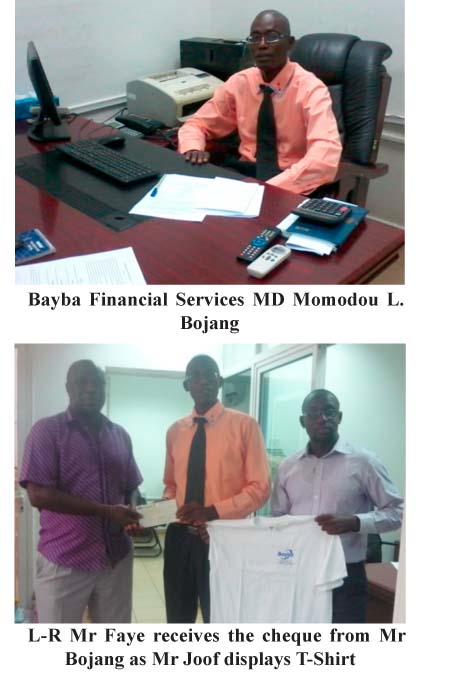 Bayba Financial Services, a subsidiary of Trust Bank Limited, the leading bank in The Gambia, yesterday 20 July 2016 presented a cheque for D100,000 to Banjul Sports Committee for sponsorship of the 2016 Banjul knockout tournament.

The financial services establishment, which has been sponsoring the committee’s knockout competition for the past three years, also gave out two sets of jerseys and 100 T-shirts as part of the package.

Speaking on the occasion, Momodou L. Bojang Managing Director of Bayba Financial Services, said the gesture was part of their corporate social responsibility, which is out to engage youths in positive activities that will benefit them and the nation.

Anything that is meant for the development of the youths and the nation, and to discourage the youths from venturing into negative activities, Bayba Financial Services is ready to support, Mr Bojang said.

He said they feel what they are doing is their obligation. “We believe in supporting the youths and the development of the country,” he added.

MD Bojang said the greater part of Bayba’s profit is invested into the youths to make them productive, regardless of the location of the village in the country.

He also said their relationship with Banjul Sports Committee has been going on for some time, over the years.

This, he added, is as a result of their transparency, fairness, peacefulness and well-organised manner in which their nawetaans are always conducted.

He described Banjul Sports Committee as one of the most effective sports committees, hence encouraged them to maintain the momentum.

Ebou Faye, secretary general of Banjul Sports Committee, in his remarks, said this is the fourth year Bayba had been sponsoring their knockout competition. He, therefore, thanked the financial services institution for their support towards the youths of Banjul and the country at large.

He said Bayba had helped them in developing nawetan football in Banjul, as well as easing sponsorship problems for them.

Mr Faye said it is important that what they do reflects what Bayba stands for, adding: “We thank Bayba Financial Services from the bottom of our hearts.”

Kebba ‘Batcha’ Njie, PRO of Banjul Sports Committee, pointed out that Bayba is supporting not only the development of sports in the country, but also other sectors.

Batcha, as he is widely known, added that the committee’s dedication, hard work and transparency to their work is the reason for the financial service’s strong value of the partnership between them.

He also noted that the money Bayba had been giving them for the sponsorship of the knockout competition had also been always used for its rightful purposes, which is another encouragement for the financial service to continue the partnership.

Mr Njie urged everyone to bank with Trust Bank, which owns Bayba Financial Services as a subsidiary.

He also called on all Gambians abroad to be sending their money for families, relatives and loved ones through Bayba Financial Services as they will always plough back their profit into the youths and national development.

Bayba, it must be noted, were last year awarded by the Sports Journalists Association of The Gambia as one of the three most outstanding companies in support of sports.

Meanwhile, Bayba Financial Services has been over the years sponsoring the following teams and communities across the country:

Wrestling: The financial services had major reason in the sport’s revival and bringing it back alive and kicking in the country, as they have been sponsoring wrestling competitions across the country from 2011 to date.

Cycling competitions: They have also been supporting the Gambia Cycling Association in their cycling events.

Marathon competitions: Bayba has been the financial service supporting sports for health events.

Musicians: This is another sector that Bayba has extended its assistance to, by supporting young Gambian inspiring musicians such as Yusupha Ngum and many others.

Education: This is the key to the development of any nation, and any individual’s success in life has never been left behind by Bayba as they have been supporting the University of the Gambia Debate Association; school-going children in terms of tuition fees and school materials.

Feed the Kids events: (This event is held twice annually) has also seen the financial service providing drinks, food, clothes, books and other school materials to children during Koriteh, Tobaski, Christmas and other occasions.

Bayba Financial Services also supports other activities not mentioned above, all over the country. 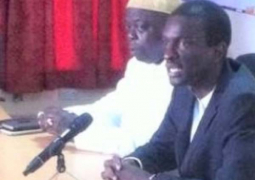 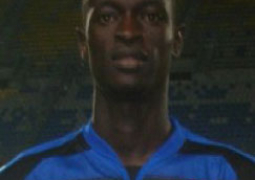