Speaking on the occasion, a representative of the association, Assan Touray, said the donation was a gift to Basse Major Health Centre from natives of Basse living in the Diaspora, to improve facilities at the health centre.

According to Touray, after series of work done by members of the association, they deemed it necessary to give the items to the Basse Major Health Centre. Mr Touray adduced that he would be visiting the health facility regularly to monitor the use of the donated items.

The Governor of Upper River Region, Alhagie Omar Khan, said he "very much" appreciated the donation, saying "it is a laudable gesture".

He challenged other Gambians abroad to emulate the Basse Association in complementing government's efforts in developing the health sector.

"This donation is here to complement government's effort to achieve excellence in health service delivery in the country," he added.

According to Governor Khan, the gesture by Basse Association is a clear indication that "they are patriotic citizens of Basse who are committed to contributing their part" in national development.

Speaking on behalf of the health centre, Abdoulie Jammeh informed the gathering that the centre has been undergoing a transformation from a major health centre to a district hospital.

He also hailed the donors, saying the gesture had come at "the right time". "The donated items will be very useful for the major health centre," he added. 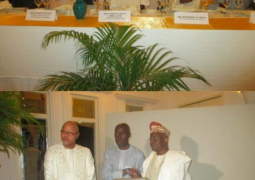