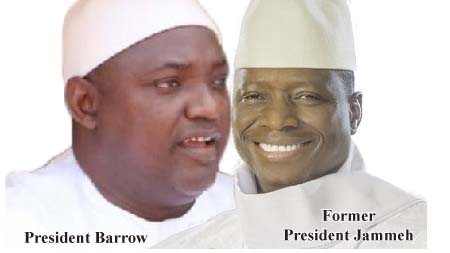 President Adama Barrow has said his predecessor Yahya Jammeh could return to the country but would be only welcomed as a private citizen. He added that the state will offer him protection.

Mr. Barrow made this remark at a meeting in Foni Sibanor as part of series of meetings he had in his Meet the People Tour. He said the perception that former president, Yahya Jammeh can become president after returning to the country should be taken as a joke, adding that former President Jammeh can only be allowed to come back to his country as a private citizen and nothing more.

“Former president can be allowed to come back to his country of origin and stay peacefully as a citizen but not to become a president again,” Barrow said. “And I think this should be known to the people. He has to come back and we will provide him protection.”

He added that his government was even prepared to provide security, protection and accommodation to the mother of former President Jammeh even if she were to come back to the country alive.

“I told former President Jammeh when I was informed of his mother’s death that security and accommodation would have even been provided to her even if she should have come to the country alive.”

He said the issue of denying citizens’ corpses being buried on Gambian soil happened during the regime of former President Jammeh, saying it is something that should not have happened in the first place.