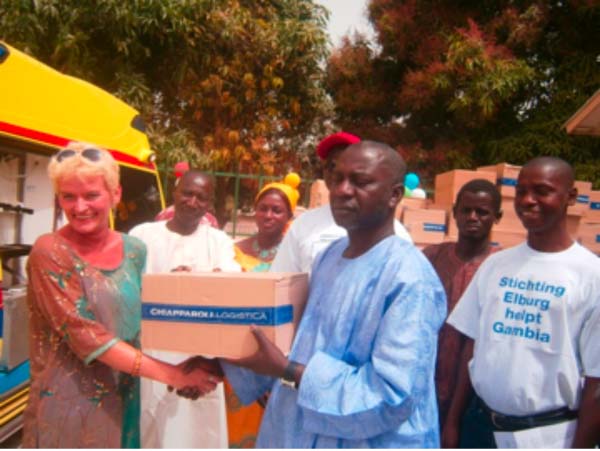 Banyaka Health Centre under the Ministry of Health and Social Welfare over the weekend received a new ambulance and an assortment of medical items worth over four million dalasi, donated by Stichting Elburg Help Gambia, a Dutch foundation in The Netherlands.

The Banyaka community and regional health director region 2 witnessed the handing over of the items and ambulance.

Speaking at the handing over ceremony, Ngally Ababucarr Sambou, regional health director Western Region 2, said the “generous gift” to the Gambian people by Elburg Help Gambia was very timely, as the government cannot not do it all alone.

Furthermore, they are aware of the fact that West Coast Region and Western 11 Health Region, in particular, is increasingly a densely populated area, and it is without doubt that the demand of health care services and medical supplies is dramatically increasing.

Therefore, he added, complementing the efforts of the government was morally the right thing to do.

“We know development is a collective responsibility, and that is whatyour exemplary organization manifested barely nine months after the inauguration of Banyaka clinic,” he said.

Collaboration is of paramount importance to reach a workable win-win-situation, and this was what the management and board of the health centre through Stichting Elburg Help Gambia manifested, he added.

Sambou thanked the team leader of the foundation, Ms Karin De Rooje, and assured her that the medicines and medical supplies would be used as intended in public health facilities within the health region and beyond.

The manager and the woman behind the Dutch foundation, Karin De Rooje, thanked the regional heath director for opening his doors to them.

Her aimed is to help people and keep them in good health, so that they could deliver a quality in health care.

“With help from sponsors from Holland, we are complementing efforts of the government,” she said.

On behalf of the Banyaka community, Amadou Y. Colley, chairman of the village development committee, expressed gratitude and appreciation to Stichting Elburg Vor Gambia for the kind gesture.

“There is no doubt that the donation illustrates your commitment and it complements to the government’s efforts to ensure quality and affordable health service delivery not only to the people of Banyaka, but The Gambia as a whole,” Mr Colley said.

The ambulance would easily connect Banyaka Health Center to other health facilities within the region, he said, and thanked the donors, especially their manager, Karin Derooje, Aart, Henk and all other members for the support.

The donated ambulance and medicines would go a long way in treating sick people and would be properly taken care of, Colley added.

In another related development, the same Dutch foundation through one ASP Amadou Colley, working with Operation Bulldozer, Monday donated an assortment of medical items to the Gambia armed forces, Fire and Rescue Services and the Gambia Police Force.

In receiving the items, ASP Ndey B. Mbye of the police clinic in Kanifing, Col. Dr. Alkali Conteh, Chief Medical Officer GAF, Roger Bakurin, Chief Fire Officer, all expressed appreciation of the gesture. The items would go a long way in addressing most of the needs of the people, particularly at their respective clinics, they said.