The event, attended by hospital management and staff as well as government officials, the Bansang community and its surrounding, was held at the hospital grounds at the S.E.N. School hall.

The occasion was held to highlight key activities the hospital carried out during the period under review (2013-2014) and provide people the opportunity to know what goes on at the hospital including clinical services and major strides undertaken to improve patient management and outcomes during the year under review.

The presentation of the statistics also witnessed the award of certificates, prizes like cash, mobile phones, bags of rice, and cooking oil to the most outstanding, hardworking and most discipline staff of the hospital.

At end of the presentation of the statistics, from various units within the hospital, questions and answers were traded by the audience based on the topics presented, as well as a drama by the S.E.N. students.

In his presentation, the CEO of Bansang Hospital, Dr Baba Jeng, said the hospital was opened on 11 April 1938 and since then it has served as the main referral hospital for CRR, URR, some parts of LRR, and Cassamance.

It is the only facility in CRR providing comprehensive Emergency Obstetric Care services thus making it the busiest hospital in the country, he said.

CEO Jeng further said the hospital has a bed capacity of 191, a staff population of 352, and it is serving a catchments area of a population of more than four hundred thousand people.

He revealed that in 2014 (69,800 )patients were recorded as patients coming to seek health care services at Bansang hospital and out of this number 5,949 were admitted for further treatment and only 3% of 1,854 of the total OPD consultation was as a result of emergency referral from other health facilities within and outside the region.

He added that malaria cases dropped by 76% (15137 to 3549) from 2013 to 2014. This drop, he noted, could be attributed to indoor residual spraying, long lasting net destructions, and intermittent preventive treatment for pregnant mothers.

Dr Jeng thanked staff of the hospital for their immense contribution towards the efficient health service delivery being provided to patients seeking medical care in the hospital.

He said the need to have a clear direction to improve quality of care and reduce the high morbidity and mortality rates requires a robust supportive organizational and management framework with a strong flexible and knowledgeable leadership, able and willing to take informed decisions.

He then used the opportunity to register his “profound gratitude” to President Yahya Jammeh for ensuring that every citizen has the right and access to quality health services.

For his part, the Alkalo of Bansang, Kebba Kora, thanked the CEO and the management of Bansang hospital for making the hospital “what it is today”.

He described staff of Bansang hospital as very hardworking and determined, saying they are ready to always help patients at the school.

Alkalo Kora also applauded the Gambian leader for building the S.E.N. school in Bansang, where nurses are produced to also serve the hospital.

He joined the previous speakers to thank the CEO of Bansang Hospital for his hard work and commitment to the hospital, and prayed for the continued progress of the hospital.

Speaking on behalf of the Speaker, Hon. Lamin Jadama described the ceremony as very important as it was out to appreciate and award staff of the hospital for their hard work and outstanding service to humanity.

“This is part of motivating the staff to do more in order to save more lives of the people, as health is the number one priority of any human life,” he said.

In his vote of thanks, the Principal Nursing Officer of Bansang Hospital Burama Badjie, thanked the management of the hospital for organizing the event, “which is part of motivating the staff”. 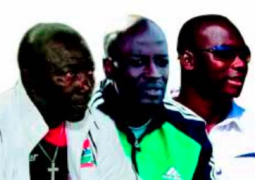