Lawyer Mboge on 16 February 2015 continued his cross-examination of the first prosecution witness, Abdourahman Jallow, in the case involving Haddy Jatta, Kabiro Darboe and Momdou Secka, bankers at BSIC bank, who were charged with conspiracy, stealing and fraudulent false accounting, before Magistrate Tabally of the Kanifing Magistrates’ Court.

Defence counsel Mboge, who was representing Momodou Secka, asked the witness whether he was communicating with Samba Mballow throughout the day. Jallow answered in the positive.

It was put to him that after the closing time when Mballow left the bank, he was in possession of $68,969.

Jallow, in response, told the court that Mballow brought D2,707,033.25 to him before the bank closed, adding that this was the amount Samba gave him after paying $68,969 to the bank.

Being aware that the money was paid into his account, Jallow told Samba to bring dollars and dalasis, but the witness said this was not true.

Lawyer Mboge put it to him that Samba Mballow did not tell him that he paid the money to Momodou Secka.

It was put to him that Mballow informed the police that he paid the money to the bank at 11 am.

Lawyer Mboge put it to him that other than the RTGS, Mballow did not give him any document to show that he paid the money to anybody.

Jallow responded that Mballow only gave him an RTGS, after he paid the money.

At this juncture, he was given a document and told that there was nothing on it to show that the money was paid to anybody. He replied that it was the document that was given to him.

Asked to show where the money was written on the document, Jallow said did not know, adding that the document was given to Mballow.

Lawyer Mboge put it to Jallow that he (Jallow) was not reliable, but Jallow told the court that all what he said was the truth.

Further told that his hands were not clean in the case, Jallow denied this, and asserted that he was clean. 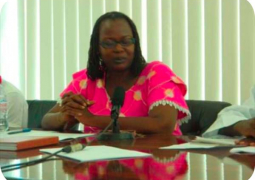