Magistrate Bojang of the Kanifing Magistrates’ Court recently convicted and sentenced one Muhammed Sireh Sey to a fine of D10,000 in default to serve one year in prison.

Muhammed Sireh Sey, who was convicted for breaking into a building, was also ordered to pay a compensation of D5,000 in default to serve three months in prison.

The facts as narrated by CPL 2118 Gomez stated that on 26 October 2014 at Churchill’s Town around 6 a.m. the convict who was on duty at Royal Seven as a Tiger Security guard left his guard post for Reliance Finance at Churchill’s Town.

On his arrival at the Reliance building, he did not meet the security guard there, one Cherno Jaddeh.

The landlord called Babucarr Badjie told Sey that Jaddeh had already closed work, entered his compound and monitored the movement of Sey, who jumped over the fence and started to break in.

Badjie then called Jaddeh, who was at the time relaxing in the landlord’s house. Meanwhile, Sey had already removed the burglar proofing.

He was arrested and taken to Fire Service Station at Churchill’s Town, from where one Reliance employee, Karafa Bojang, was contacted who reported the matter to the police.

The charge sheet read that on 24 October 2014, at Churchill’s Town in the Kanifing Municipality, Muhammed Sireh Sey broke into Reliance Financial Services building at the Churchill’s Town branch with intent to steal. 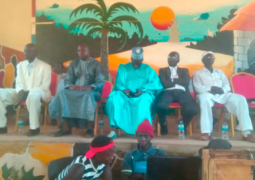