The social and environmental studies club of in Region One recently held a two-day talent show at their school compound.

The programme of activities included a debate on the topic 'polygamous marriage is more important than monogamous marriage' between Grades Seven and Eight. There were also drama plays, poem presentations, eating competitions, a fashion parade and traditional dancing.

Speaking to The Point shortly after the show, the chairman of the organising committee, Mr. Nfansu Jaiteh, a teacher at the school, said that the show was designed to allow students to come together, interact and exhibit their talents in various ways. He also said that the show aimed to foster unity in the school.

The talent show was witnessed by the social and environmental studies club of in Region One of KMC and a large audience from the nearby settlements. 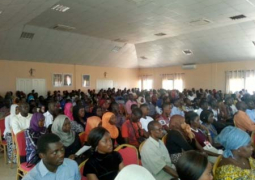