President Yayha Jammeh has called on the Gambia U-17 World Cup team to desist from what he described as entertainment or fancy football and work towards bringing the trophy back home.

The Gambia's football Chief patron who have thrown a gigantic challenge to the players to go to and play as a team so that they can bring the trophy home, said "Whether you play an entertaining football or not, what is important is to win the World Cup so that the Senior National team can also emulate your achievement by wining the coveted World Cup trophy in 2014."

The 's U-17 team that will make their second appearance in the world's most popular cadet championship in received these words of encouragement from the Gambian leader on Sunday when the team made their traditional visit to President Jammeh at the nation's highest office in State House before heading for .

He advised the players not to take anything for granted, given the fact that the whole world will be keeping an eye on the two time African champions; hence they are the champions of .

"You are going to the World Cup to play as a team and bring the trophy," President Jammeh challenged the players.

The Gambian leader tasked the players to work hard work so that they would realise their objective of wining the World Cup, noting that if they work hard by the power of the Almighty Allah they will make it through discipline and hard work.

The chief Patron also gave an undisclosed some of money to the team and assured them of a bigger reward when they clinch the coveted trophy before finally handing over the flag to the team Captain Ebrima Bojang.

The visit to the State House, according to the GFA Boss, Seedy M.B Kinteh, who led the delegation to State House was meant to seek wisdom and blessings from the President who has over the years served as the main source of inspiration for the Baby Scorpions as a result of his unflinching support to the success of the team at all times. 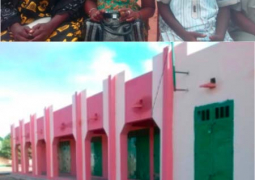