The Gambia has joined many others such as UK lawmakers and US academics in supporting the East China Sea Peace Initiative.

The initiative was the proposal of the Taiwanese president Ma Ying-jeou towards addressing the sea dispute between Taiwan, Japan and Mainland China.

Just like the majority leader in the Gambia’s National Assembly said, the East China Sea Peace Initiative is a laudable and equitable initiative by the people and government of the Republic of China (Taiwan).

It is a well-thought-out strategy that is aimed at providing a peaceful resolution to the dangerous territorial disputes involving the states bordering the East China Sea.

It also provides an amicable win-win solution for all claimants, without resorting to the use of force.

We, therefore, join the Gambian deputies to call on the parties concerned, the United Nations and all its organs and the entire international community to support, enhance and facilitate the smooth implementation of this new peace initiative by Taiwan.

Like the nominated member and deputy speaker said, Hon. Fatou Mbye, there is no winner in war, instead all are losers.

So, therefore, the best choice is peace through which there can be sustainable development and progress in East Asia.

Using peaceful means to resolve disputes, as proposed by President Ma, is laudable and worthy of consideration.

The strategic location of the disputed island calls for understanding and consideration of peaceful means in addressing the protracted dispute. 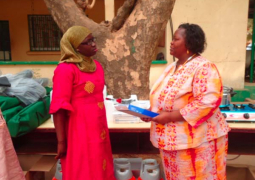