Mr. Joof, who confirmed his appointment to our reporters, said in an interview that he will ensure that all expectations are met to satisfaction. He commended the National Disaster Management Agency under the Office of the Vice-President for the trust and confidence repose in him.

He said though the appointment is a big challenge for him, he would measure up to expectations.

"It is a big challenge but I have no doubt that I will live up to expectations. I want to ensure that I would not betray anyone," Joof said.

According to him, working with issues relating to disaster would require hard work, commitment and patience.

Mr. Joof went on to say that his first priority is to ensure that people are more sensitised in areas like disaster outbreak, calling for attitudinal change. 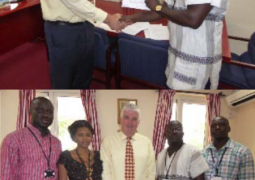