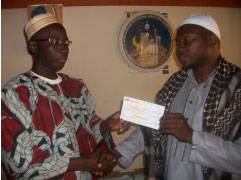 The payment 2nd of its kind was meant for the completion of the building of the school.

According to the official of BAC at the presentation, the gesture forms part of the council’s corporate social responsibility in giving back the revenue collected from the community in the form of development projects.

Speaking at the handing over of the cheque, the BAC’s director of planning and development, Adama Bojang, described the presentation as very timely.

She said upon hearing that, some officials of the council went to visit the school, whose construction has gone very far.

She said upon that the council decided to cost the completion of the school which rose up to D229,620.00 which the council has approved for the community.

She said this is the first of its kind within the council, adding that the council decided to follow the footstep of the CDDP by empowering the communities themselves by giving them the money to manage it themselves.

“If you succeed it means other communities will also succeed but if you fail then I personally will blame the community,” she said.

For her part, Mariama Bah Saine, Ward Councillor for Banjulinding ward, thanked the council for the gesture.

According to her, this is a clear indication that the council is trying all it could to plough back the revenue collected to the communities in one way or the other.

She also challenged the councillors to go back to their electorate and discuss with them issues affecting them in their areas.

The ward councillor of Block Ward, Ismaila Badjie, expressed joy and appreciation with them through the council’s intervention in this ward.

For his part, the chairman of BAC, Alh. Sunkary Badjie, said the presentation of the cheque was part of their final contribution towards the completion of the school.

He said the first payment amounting to D129,620 was earlier made to the community.

This has shown that the council is doing every thing possible to turn the small monies collected from the communities into services and development initiatives, he said

Chairman Badjie urged people in the region to continue to pay their dues on time for their own good and in their interest.

Speaking on behalf of the CEO, Modou Jonga, public relations officer of BAC, challenged the community to take full ownership of the school as well as ensure the money is properly utilised for its intended purpose.

Jonga also seized the opportunity to call on the taxpayers to come forward and pay their dues on time, adding that the council is ready to plough back this money to them. 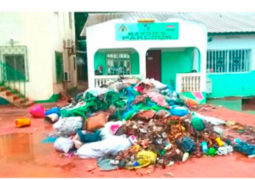