The trial involving Lamin Sanyang and 5 others who were charged with criminal trespass, conspiracy and wilful damage to property, continued yesterday at the Brikama Magistrates’ Court before Magistrate Sidi Jobarteh.

The case continued with the cross-examination of the third prosecution witness (PW3), Momodou Lamin Manneh, by the accused persons.

Under cross-examination by the 1st accused, Lamin Sanyang, the witness, Manneh, told the court that the 1st accused person was arrested in the morning on the day of the incident.

According to Manneh, he saw the accused persons in a group of people who were chopping and cutting down the mango trees on the said plot of land.

The accused person put it to him that at the time of the incident he was not there, but the witness said the incident found him in his farm.

The witness further told the court that the 1st accused person is the VDC chairman in Babylon village, adding that on the day of the incident he (the witness) was clearing his farmland, when the accused and the others came to attack them.

According to the witness, he was born in Mandinary village and has all the documents for the land, since his grandfather used to farm on this land.

He said Yankuba Ceesay was arrested under the mango tree and Abdoulie Badjie was the ring leader on the day of the incident, and was also arrested on that very day.

The case was adjourned to 20 October 2014, for continuation of the hearing. 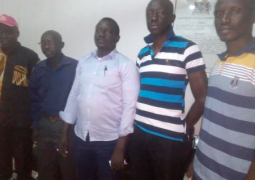