Mr. Baaba Sillah (mu Sablel) will this Saturday launch two of his books- Dabbali-Gi and Pencum Taakusaan, at the Paradise Suites Hotel at 10am, this paper has learnt.

Dabbali Gi is the sequel to "When the Monkey Talks". "It too is a socio-political historical novel that takes up the most significant issues and developments that engaged the people of Kataminaland and the rest of in the period spanning the beginning of the decade of the nineteen forties through to the early fifties. It follows the fortunes of three distinct communities within a wider community: Those that were sent to fight a war that did not belong to them; the vicissitudes that were the lives of the families, friends and communities they left behind; the decisions made by the colonial government on the community's behalf. The novel highlights the issues and debates that were raging, not just at the level of the Legislative Council chambers, but through print media and other fora. This book therefore canvasses important landmark events of this exciting period in Kataminaland's history."

Dabbali Gi derives from the Wolof word "Dabbali" - meaning, in the context of the lives of the everyday farmer - the loan from the middleman to whom the farmer will mortgage his crop - at times for several years in a row. Consequently, both he and his loan-agent trader are ensnared in an unholy and inextricable bind, to which the farmer becomes a debt-slave.

Much like its precursor, the book takes up important issues and events, whose impact are still being felt today in Africa: Colonial welfare and development, the Atlantic Charter, Pax Britannica, Lugard's 'Dual Mandate' and indirect rule.

The novel draws from its historical perspectives, towards the future, seeing possibilities for Kataminaland, and indeed for in general, to right the wrongs and to find her way in the world as free and independent nations.

As Baaba himself has argued: "For many who were colonised and who even today are boxed into either a failed nation-state or states with other similar categorisations; choices are, as yet, still limited but we must make up our minds before the world leaves us stranded at the shore. As the tides recede, leaving us without the wherewithal of eking-out an existence in a hostile terrain;  with a sail-less boat, a map with neither beginning nor end, no cardinal points and no compass pointing towards a positive destination. must therefore find the solutions to her unique problems." 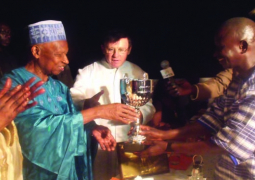