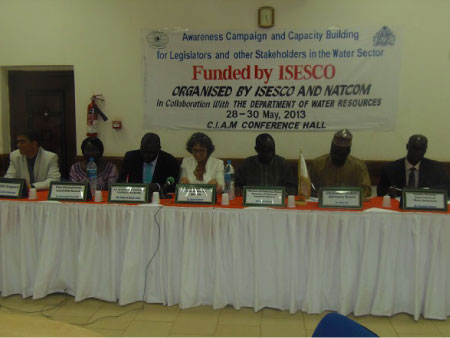 A three-day national workshop on awareness campaign and capacity-building for legislators and other stakeholders in the water sector on the urbanisation management and protection of the Gambia River Basin is currently underway at the CIAM conference hall in Kanifing.

The Gambia National Commission for UNESCO, in partnership with the Department of Water Resources,organised the forum within the framework of the Islamic Educational Scientific and Cultural Organisation (ISESCO) plan 2013-2015.

The workshop was meant to raise awareness and build the capacity of legislators and other stakeholders within the water sectors and to explore the challenges facing water management in the light of increase in demand for water access.

In his welcoming remarks, the acting Secretary-General of the Gambia National Commission for UNESCO, Mr Yahya AL- Matarr Jobe, commended ISESCO for the opportunity availed them.

For her part, a representative of the Director-General of ISESCO, Dr. Najat Sheriff, a program specialist at ISESCO, said ISESCO is pleased to participate in conducting the campaign in The Gambia.

Despite the huge efforts being made by the member states in the field of water, she said, so far the public policies followed in water utilisation and management did not reach modern principles of integrated management.

The strategy, she added, aimed at observing climate change and applying management modern techniques, including demand management in sustainable manner to reduce water scarcity acuteness, and its negative impacts on population, environment and sustained development to ensure water security in the Islamic world.

According to her, increasing awareness about water sector and its importance is essential for immediate and future request for the member states’ leaders.

Mr Bernard Mendy, the Deputy Director, who stood in for the Director of Water Resources, said there is a need to realise that the challenges of seeing safe and adequate water for all regions of the world is proving to be one of humankind’s most daunting tasks.

Water stress is already a grim fact in many regions, and climate change will disrupt the water cycle on a global scale, he said.

He further stressed that without readily accessible water, available in convenient locations life will become unbearable for many.

In his official statement, Mr Mass Axi Gye, the Minister of Fisheries and Water Resources, said global increase in water demand related to population growth and economic development has increased heavy pressures on the resources, particularly in developing countries where water plays an essential role in food production, industry, public health, among others.

He further stated that the Gambia National Commission for UNESCO, NATCOM, in partnership with the Department of Water Resources, under the Ministry of Fisheries and Water Resources with support from ISESCO,  organised the three-day awareness training and capacity-building workshop for legislators and other stakeholders, which he added, could not have come at a better time than now.

He said the Government of The Gambia is conscious of the problems linked to water, noting that in a bid to better embrace the integrated water recourse management process the government has created the enabling environment through the elaboration of the National Water Policy 2007 and reviewing of the 1979 Water Act.