The inauguration ceremony attracted a large crowd of people from Ndungu Kebbeh and its surroundings.

The new inaugurated nursery school contains a three-classroom block, one office, eight toilets and a kitchen.

Speaking at the ceremony, Abdurrahman T. Bangura, project coordinator for Asturies for Africa Association, said it is an occasion of great significance in many ways.

“It is significant and because of the cooperation, many organizations and individuals have made the establishment of the school and construction of this complex building possible,” Mr Bangura said.

According to him, it is also significant, for the trust bestowed on him as the coordinator for Asturies for Africa, to see the project successfully completed with satisfaction.

The government has made education a top priority at all levels and have made important contributions to the sector, he said.

“His Excellency the President, Sheikh Prof. Dr Alhaji Yahya A. J.J. Jammeh, and the Ministry of Basic and Secondary Education have provided encouragement throughout the process for which I am very grateful,” he said.

He said the support provided to a private school is a visible demonstration of the government commitment to private initiatives in The Gambia and a testament to its openness and flexibility in developing with committed partners.

He also thanked the Ndungu Kebbeh Alkalo, the VDC and Pa Sally Saine and his family for finding a way to make the land available for the school, as well as Kerewan Area Council and the Minister of Education for the registration and issuing of the licences for its construction and operation.

“Today we are all witnessing a moment of happiness and recognizing the efforts made by Alhaje Modou Faye and his family assisting me in most of my difficulties,” he said.

Ndungu Kebbeh Nursery School came into existence due to the difficulties faced by the management of Aljamadou Nursery School, which was also constructed and sponsored by Asturies for Africa shortly after the construction in the year 2007, he said.

Ndungu Kebbeh Nursery School was established on 14 December 2009 with 175 children and today they are having a total of 136 children, 71 boys and 65 girls.

The Asturies for Africa Association, he reiterated, will continue to provide free education, feeding, free uniforms, teaching and learning materials, teacher’s salaries, payment of taxes, social security funds and above all provide assistance to other schools it links with, especially Ndungu Kebbeh Basic Cycle School.

According to him, Asturies for Africa is not only investing in education but also playing a significant role in the health sector, through provision of medicines and equipment to a number of hospitals and health centres.

“Asturies for Africa does not also stop there; it is also playing significant roles in community development by trying to resolve long-standing problems of the community like the water and the health sector system, which shortly we will call it a thing of the past, by the grace of God,” he said.

He thanked all persons and institutions who in one way or the other contributed to the success of the project.

Oscar Sainz Biazan, vice president of Asturies for Africa Association, said that in their organization they don’t want too much promises; they rather deal with facts and realities.

He pledged their commitment to empowering the community of Ndungu Kebbeh including new projects for women.

Nuria Rodilla Avila, financial sponsor, said education is one of the most important things in life while describing the project as very important.

She thanked the community and Asturies Government who have made the project a huge success.

Ousman Ceesay, who represented the permanent secretary of the Ministry of Education, said the ministry is highly honoured to witness the landmark achievement.

“As you may know the ministry does not deal with construction of nursery schools for communities, for that being the case the government has opened up to give the environment to any organization or anybody that is willing to come up with such an initiative,” he said.

Some of the constraints of education, he outlined, are that they cannot provide structure like the ones being inaugurated in Ndungu Kebbeh or catered for children for that age.

According to him, the association has first signed a memorandum of understanding with the ministry and since then they have been updating them about their activities.

He urged the community of Ndungu Kebbeh to take the responsibility to take good care of the project to ensure its sustainability.

Alhagie Bai Mbye Sarr, APRC mobiliser who represented the NBR governor, thanked the association, its partners and donors for the development.

He urged the Ndungu Kebbeh community to keep the project with all seriousness and show great care for the betterment of their children. 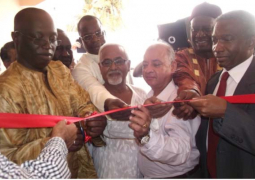