The Assemblies of God Church- The Gambia, established about fourteen years ago, gathered believers at their church located at Kanifing South behind L.G Electronics to honour and appreciate Mr. Thomas Gregory George Senghore, a Justice of the Peace of in the and a devout Catholic, decorated by the in 1975 by Pope Paul VI.

The Assemblies of God are appreciative of Mr. Senghore for renting out his house to them for fourteen uninterrupted years until the church acquired its own premises.

Mr.T.G.G Senghore, who is in his 70s and a devout Catholic had been a civil servant for a long time. He'd served as commissioner in four of the regions. He'd also served as Permanent Secretary for Finance and as a Governor of the Centre Bank of The Gambia. He retired in 1988. At the moment Mr. Senghore serves on several important boards in the country.

According Mr. Senghore, Christianity has been in his family for over 500 years. "I have an ancestry in . They built a well in my village in Joal in 1549. It serves now as a tourist attraction. I am a Serer by tribe, one of the three tribes that accepted Christianity in the Sene Gambia Region were the Serrer, Jola and the Bassari in the East of Senegal."

Giving a brief background of Christianity in the Gambia, Mr. TGG Senghore said Christianity especially the Catholics arrived about 1849, while, the Anglican and Methodist in 1821 and their 2nd coming was in 1849.

"The first Church in Africa South of the Sahara is found in The Gambia in San Domingo, 20 miles from , in the North Bank of the River near . One good thing about me is that my parents' family were Christians before the Christians arrived. My grand mum was among the first to be baptized in 1848 among the Serrer in an area in ," he said

Mr. Senhgore, in receiving the citation and Certificate of Appreciation says, "These are nice gestures. I appreciate them. By this celebration I call it deep sincerity and I thank them for it."

He commended them (Assemblies of God) for the spiritual and educational developments.

"I hope they'll expand and get deep root in The Gambia because it is all part of National development," he said.

Talking to landlords, Mr. Senghore said that any believer has the responsibility to other believers. The work, he said, is not for profit making but for souls, noting that therefore any believer should be of help, "for the development of souls for the greater glory of God."

Part of the citation reads:

"You Thomas Gregory George Senghore Esq., Justice of the Peace of the Republic of The Gambia, a dedicated Kingdom minded Christian Willingly and lovingly rented out your house located at Kanifing South in the Kanifing Municipality of The Gambia to the Assemblies of God -The Gambia for an uninterrupted period of 14 years – 1996 to 2010..."

Rev. Jerry E.K. Adjorlolo, the National Head of the Assemblies of God, The Gambia said they were full of gratitude to Mr. Senghore for what he did for God.

"We would have found it difficult if he did not have given us his premises. It is good to know that there are people who are kingdom minded, able to show hospitality to others," he said.

Noting that he had known Mr. Senghore before, Rev. Jerry said it did not come as a surprise to him giving them his (Mr. Senghore) premises. "His love for God and others and his Christian faith are evident to talk about him. So it was not a surprise," he said.

Rev. Jerry encouraged landlords not to hesitate giving places to Christians for Church, "We are all fighting for the . Their names will be in the great Book of Hope. It will not go unrewarded by God," he concluded. 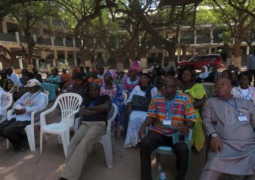