An assault victim recently informed the Bundung Magistrates' Court that an assailant jumped on her and beat her until she bled and was taken to the hospital where she was treated and issued with a medical document.

Jainana Jallow was testifying at the Bundung Magistrates' Court, before Magistrate Mbacke in the assault case involving one Sarjo Demba, who was charged with assault.

Mrs Jallow told the court that on 12 November 2010, she swept her house and the compound she stays before she left for Fajikunda Health Centre.

She said that on her return, she found that the accused had littered the place she had swept, adding that she again swept the same place for the second time.

The complainant further added that the accused again poured water where she swept and littered the place all over. "I then told the accused to stop what he was doing and he told me he understood that I am a problematic woman but I should be careful of him," she explained.

The accused, she added, insulted her and continued to insult her and as a result, she went to report the matter to the landlord.

"As I was going to the landlord, the accused jumped on me and beat me until I bled," she informed the court.

According to her, they were separated by one Fatouding and she went to the Jammeh Foundation Hospital where she was treated and issued with a medical document.

The medical document was later tendered and admitted in court as an exhibit without any objection from the accused. 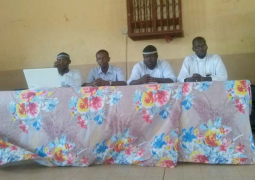